Today is, as all regular shoppers will know, Black Friday. It’s a one-day shopping event that takes place after Thanksgiving when retailers drastically lower prices of popular products and customers go nuts over said products. Retailers end the day with record-breaking amounts of revenue and shoppers go home with a smaller hole in their pocket, all giddy inside, ready to unwrap their shiny new items (or maybe save them for Christmas). Since we’re a technology blog, we’ve been covering deals and discounts on Black Friday from Microsoft and Apple and, in this post, we’ll be talking about some of the deals on Android smartphones. Check them out after the jump!

If there is one retailer that is simply going all out with Black Friday discounts, it’s Amazon. The online retailer is selling its complete catalogue of Android smartphones for just a single penny.

Stop rubbing your eyes in disbelief, folks. You read that right: all Android smartphones for just. one. penny. 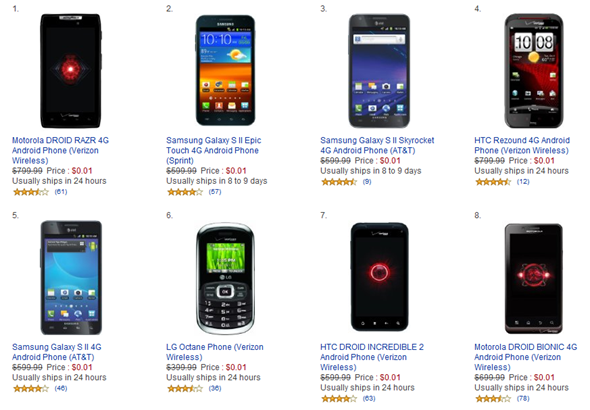 Wait, there’s got to be a catch, right? Well, yes, you’re right. There is a catch, a very big catch, to be honest, but folks in the US are used to this: All Android phones from Amazon available for $0.01 come with a two-year contract from three of the four major US wireless carriers: AT&T or Verizon or Sprint (T-Mobile phones not on discount, at least on Amazon) depending on which phone you order.

Anyway, here are some of the phones listed by Amazon (link given at the end):

Wireless carriers in the US have their own Black Friday deals going on as well, but they simply pale in comparison to the massive $200 discounts available on the some of the superphones mentioned above.

Besides this, Best Buy retail stores around USA are selling the original ASUS Eee Pad Transformer 16GB for a cool $249.99. They’ve even got the Samsung Galaxy Tab 10.1 with a free USB connector and $50 gift card available on their official website (link below!).

All these deals last for today only and will likely last only till stocks are available, so order your preferred gadget as soon as you can!