When it comes to apps it can prove to be somewhat difficult for developers to get their apps noticed due to the fact that between the iOS App Store and Google Play hub, there are close to one million apps available to users. It also stands to reason that certain apps and categories are always going to be more popular than others, with social networking and photography apps as well as games always likely to be a user’s first port of call on the respective app stores.

There are undoubtedly thousands and thousands of apps which have been developed for Android or iOS which provide a great user experience that just haven’t been discovered or have gotten lost in the huge system, which is a crying shame due to the amount of effort developers put into producing apps only to suffer due to not being able to gain enough exposure for their work. The 1Weather app for devices running Android 2.1 and above is an example of a beautiful and functional app that some may feel doesn’t offer the most exciting of functionality, but still provides a first class experience. 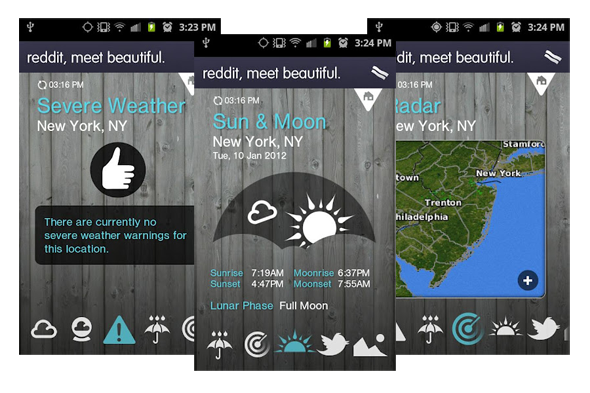 Users shouldn’t let the fact happen that this is a weather app and shouldn’t fool them, as 1Weather is a comprehensive piece of work, capable of holding its own against any app which lives within one of the more popular categories. With real-time global forecasts, custom alerts and the ability to tweet out the local weather conditions, the app has pretty much propelled itself to the top of the pile when it comes to environmental conditioning apps. The gorgeous user interface provides a combination of styles without compromising on the functionality and allows users to access the aforementioned real-time forecast information for pretty much any location in the world. The 1Weather app also has a pretty unique feature of providing local area weather tweets to give a perspective on what people in your vicinity are saying.

The inclusion of very attractive animated maps and radar views is also something which sets 1Weather apart from the competition and fits in perfectly with the UI that has clearly been crafted with attention to detail being paid in every aspect. In my opinion, 1Weather is what a weather app should be – simple, elegant and packed with features. The app requires Android 2.1 or above and is available as either an ad-supported free of charge download or as a $1.99 pro version.