The PlayStation 4 may be on the agenda for many a Sony fan this year, but as the company has indicated on numerous occasions, there’s still plenty of gaming to be had, and money to be made, from the current-gen PlayStation 3. As such, Sony announced just last September that it was planning to throw out a 12GB, flash storage-based version of the console, with the catch being that it would only be made available to the Hong Kong and European markets. However, much to the benefit of US-based PlayStation 3 fans, the company has gone back on its word, and decided to throw out the new variant of the ageing games machine to those based in the States.

The Japanese company seemed pretty adamant that the 12GB variant would not be landing in North America, but then again, it’s not as though mind-changing isn’t a frequent fixture of the technology industry. In the past few months alone, we’ve seen plenty of back-tracking in the intensifying next-gen console wars, and just a short while ago, Microsoft took a dramatic u-turn on its initial claim that the Kinect would need to be on and functioning in order for the Xbox One to operate.

Now, those looking to stick with the current-gen PlayStation will be able to enjoy the benefits of a slimline console featuring a small amount of flash storage. Obviously, those who like to load up on various content will perhaps struggle with these limitations, but if you’re not ready to dive head-first into the PlayStation 4 and are looking to get some gaming done while you make your mind up, this new 12GB model would seem the perfect interim machine. 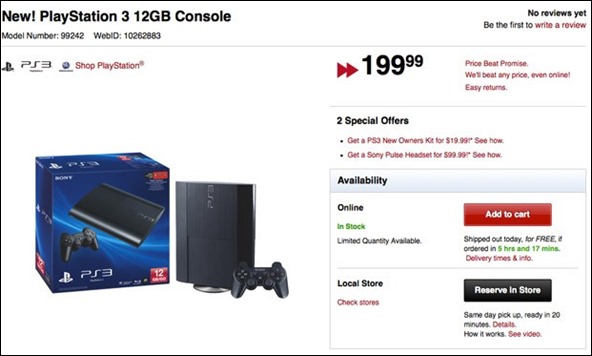 Lest we forget, there are still plenty of top titles arriving to the PlayStation 3 in the near future, including the likes of GTA 5 and FIFA 14, so if you can find a place for the PlayStation 3 in your life, the 12GB version looks a good deal. Future Shop, a Canadian store, had it listed as "In Stock" for $199.99, and with reports suggesting a Stateside drop on August 18th, it would seem as though Sony is as determined as ever to get as many PS3s into living rooms as possible, even at this late stage. But sadly, the entry has been removed, as we last checked at the time of writing.