WINGStand Lets You Connect Your iPhone, iPad To Your Apple Wireless Keyboard [VIDEO]

Ever wished you could use any smartphone or tablet as a laptop? WINGStand, something as obvious as a simple stand for the aforementioned devices, including iPhones and iPads, might enable you to do just that very elegantly. 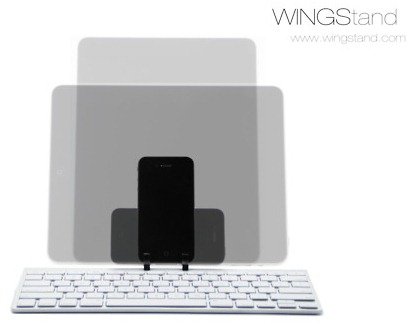 This project is being engineered by Daniel Haarburger, a college student currently at Stanford University. Haarburger is currently raising funds via Kickstarter, where he left a rather detailed product page. WINGStand is comprised by two small clamps that are attached to any full-sized wireless keyboard, as long as it fits, no physical connection happens between the stand and the keyboard. Any device of the user’s choosing can then be attached to the clamps just as easily, as you can see in the image below. 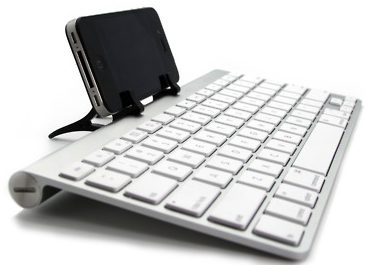 According to Daniel, the WINGStand is manufactured using injection molding, an efficient and accurate method that can have rather steep upfront costs. In order to be able to manufacture it, some money will be needed:

The WINGStand is manufactured via a process called injection molding. This allows us to assure an impeccably high quality product, but it also entails a large upfront cost for initial tooling.

The WINGStand can work with many devices long as they fit the stand and support any form of wireless keyboard. Despite the wide range of compatible devices, this stand was clearly tailor made tailor for Apple devices, since all the pictures that can be found on the Kickstarter’s page feature some sort of Apple device along with Apple’s signature wireless keyboard. Users who own cases shouldn’t have to worry either, since most should work just fine with the WINGStand:

It also works with most cases including the iPad Smart Cover and 1st Generation iPad case.

What can you do to help? As with any Kickstarter project, a small donation would be the best way. This project’s author is giving out special perks for those who donate, which can go from a standard set of clamps before they’re officially available for those who pledge $20 or more; to a special set of clamps made out of aircraft aluminum, along with many other perks such as sneak peeks into future products and recognition as an angel investor, for those who are willing to pledge $500 or more:

You will also receive 10 sets of WINGStands available in either white or black to give to family and friends, recognition as an Angel investor on the website, and for the top two contributors, your name will be immortalized on the packaging of all first edition WINGStands.

Will the iPad become every geek’s signature laptop? Perhaps not, but this projects makes it plausible. Be sure to head over to this link and check out WINGStand in its glory.