Almost everyone has seen Minority Report, and why not – that blockbuster flick was decades ahead of its time in terms of the technological and computing innovation that it presented. One particular theme from the Tom Cruise flick that stuck with viewers and tech enthusiasts for a long time was being able to control and manipulate computer interfaces through gestures and body movement. A lot of developers and companies have attempted to incorporate that one way or the other, with the most successful example being Microsoft’s Kinect accessory for its Xbox consoles.

Today, we’ve come a long way since then, and gesture control can be found in several areas of our daily lives, from computers to gaming consoles to smartphones and tablets. With the Galaxy S4’s Air Call Accept feature, Samsung started off a trend of controlling the device without touching it at all, and the trend seems to have caught on generally as well. Enter Magic Unlock for Android, which offers a way to unlock your smartphone by just hovering your hand over the screen. Neat! 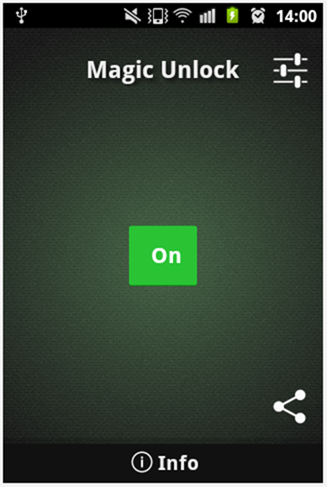 The application’s usage is fairly simple. It makes use of the device’s proximity sensor (should it have one) to unlock your Android when the sensor is covered. There isn’t much to configure other than turning the functionality on, after which you can set up the preference in terms of how you want Magic Unlock to run. Low priority, which will keep the app in the background at all times, High Priority will run in foreground, while Medium is a balance which will run in foreground until you have sufficient free RAM, but move to background once memory becomes low. Honestly, neither of these makes any difference to the app’s functionality. 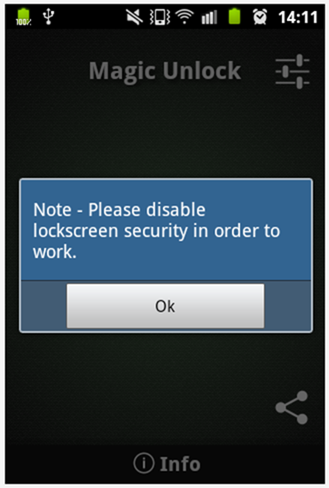 There are a few limitations to Magic Unlock as well. For one, this app would work only if there’s no security mode applied to your Android device other than the Slide unlock. Then, for the proximity sensor to become active, the screen first needs to be turned on before the app will register any changes to the proximity sensor. This in turn helps with huge savings to the battery, because the app will engage the sensor only when the device is actually active and not passively drain battery.

Magic Unlock will work with any Android device running version 2.3 and above, but isn’t compatible with Android 4.3 yet.

(Download: Magic Unlock for Android on the Play Store)