When Apple launched the iPhone 4 handset, we all marveled at its sleek lines and glass and metal construction. A whole 12 months down the line and we’re still hard pushed to think of a better looking smartphone, and in a world which includes the likes of Samsung Galaxy S II, that’s saying something.

The iPhone 4 has some rather spiffy innards too. Its A4 CPU and 512MB of RAM help the fourth generation iPhone to power through the weird and wonderful apps in the App Store – it’s one powerful little phone.

The problem is though, with all that power under the hood it’s a shame that nobody ever really gets to see it. Wouldn’t it be nice to be able to look at your iPhone 4 and think ‘yep, that there A4’s earning its money today’ right in the middle of a spot of Real Racing 2? Well it turns out you can, thanks to a translucent conversion kit.

Coming to us from MICGadget, said conversion kit comes complete with front and rear panels as well as more accessories and tools than we’d every have a hope of knowing what they are for:

Tools which are required to disassemble your iPhone are also included, so you do not need to spend more money on the tools. All kinds of tools are included, such as a SIM Card eject tool, a Phillips-head screwdriver, a 5-point Pentalobe screwdriver, two pry-opening tools, metal tweezers and a vacuum suction cup (you need this for first time disassemble). A translucent Bumper is also included. If you are not a fan of translucent gadgets, we also offer transparent front and rear panels for the same price. 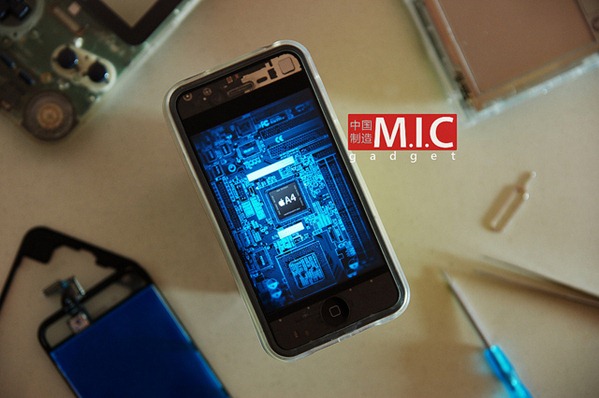 The fitting is apparently a breeze – that is until it’s time to install the front panel. According to MICGadget, it’s actually so complicated that they recommend getting a professional to fit it for you, though we can’t help but think your local friendly Apple Store Genius perhaps isn’t the way to go.

One thing that would concern us slightly is the affect the new rear plate could have on the quality of photos taken with the iPhone’s camera. Other third-party rear plates are known for causing poor photographs, with the flash especially susceptible to being affected by inferior quality components places in front of it.

Thankfully, at least according to MICGadget, this kit suffers no such problems.

The translucent (or ‘frosty’) kit is available to buy now for $79. If you’re on the fence then hang tight – we have on winging its way to us right now and we’ll report back on just how easy, or how difficult, the conversion actually is.

Cross your fingers for us folks!