If you like gaming, but haven’t the time, space, or dedication to invest in a games console from the likes of Nintendo, Microsoft, or Sony, enjoying high-end games on your HDTV is something you probably don’t get to do that often. But never fear, because one group of Kickstarter enthusiasts have not only got your back, but are looking to revolutionize the way many of us enjoy gaming on the big screen with small, portable console capable of running Android games on a TV.

Kickstarter is a treasure trove for exciting, creative innovations to transform from ideas and concepts to products on the market. Often, if a product doesn’t reach its Kickstarter goal, it was just never meant to be, but on occasions, products simply exceed all expectation, and the GameStick – a minuscule games console costing less than most set-top boxes – has done exactly that. With 28 days to go, it has already raised an incredible $110,000 of its initial $100,000 goal, and at this rate, could be an early candidate for Kickstarter’s biggest success story of 2013. 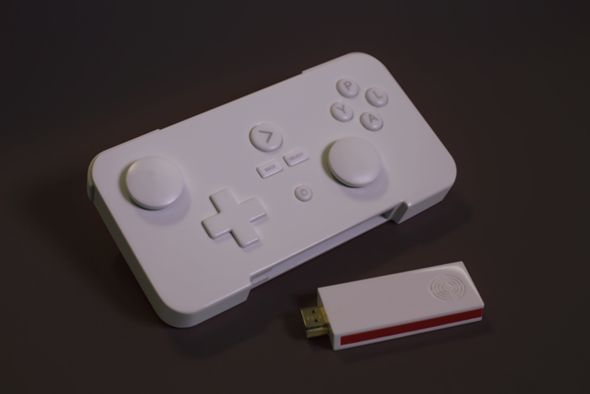 It looks like a bloated USB thumb drive, and in essence, it’s not too dissimilar. It connects via HDMI rather than USB, though, and the developers behind it have already pinpointed over two hundred games which, they say, already run smoothly on the console.

In many respects, it’s similar to the Ouya console, and although it’s less powerful, it is a great deal more compact. I guess, for all intents and purposes, the GameStick is a console, although I must admit, I’m finding it somewhat difficult to blot out the images of the comparatively-monstrous Xbox 360 and PlayStation 3. With some four weeks to go until the Kickstarter end-date, perhaps we can pen a new name?

In the meantime, it will be intriguing to see whether, once we’ve all sobered up from our awestruck states, the GameStick can survive some of the challenges which lie ahead. Only a small minority of game support, coupled with the difficulty in getting games to look great on the larger display, are just two such obstacles GameStick will need to overcome. With that said, it’s such a novel invention, that I sincerely hope it does.