Apple introduced an interesting interesting feature to the software keyboard on the iPad with iOS 5, and it’s one that some had been crying out for, and others loved without even knowing they wanted it.

The split keyboard, for use when the iPad is in the portrait mode, makes it easier to type on the device with just two thumbs by splitting the keyboard into two and pulling the halves to the sides of the screen. It’s great for using when you don’t want to use the iPad in landscape and want to type with your thumbs a little more easily.

While that’s all fine and dandy, it turns out that the split keyboard actually has another trick up its sleeve, and it’s a doozy!

See, people type in a few different ways, and to some the split keyboard actually splits in the wrong place, making it uncomfortable to hit certain letters.

Users may, for example, wish to tap the ‘T’ button with their right thumb, rather than the left as Apple expects them to. They can do that now, but they need to reach right over to the opposite side of the screen to do it. It’s a great idea to chew on, and it’s actually rather cumbersome, too. But it’s OK. Apple’s got your back. 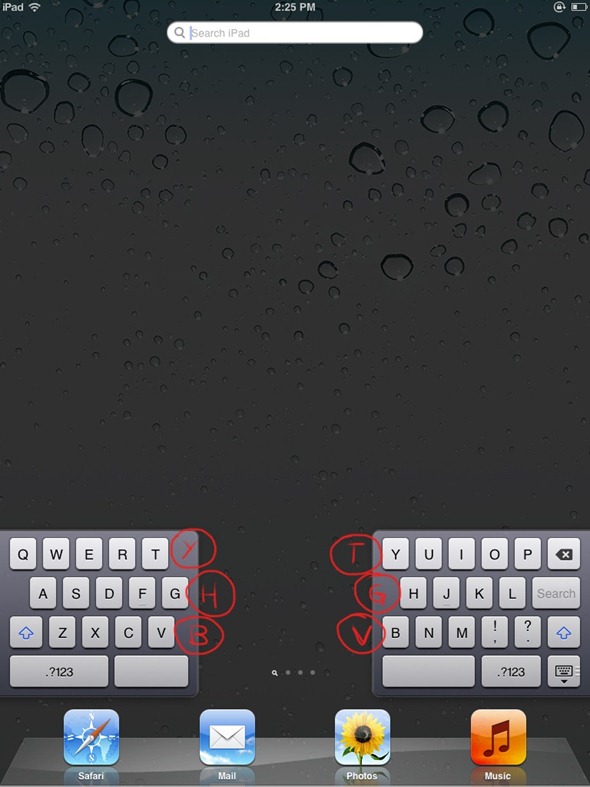 Now it’s been discovered that the iPad actually has six phantom buttons allowing users to tap the opposite side of the screen to where the T,G,V and Y,G,B buttons are and still have them registered by the keyboard. Tap just next to the letter ‘Y’ and you’ll be given a letter ‘T.’ Pretty cool, right?

It might not seem like much, but it can really help speed things along if you tend to type this way on a hardware keyboard.

Go ahead, give it a try yourself. You can split the iPad’s keyboard in two by either tapping and holding on the ‘toggle keyboard’ button on the lower-right, or simply pulling the keyboard apart at the middle. We prefer the latter method, if only because it makes us feel a bit special.