Microsoft’s Surface Pro tablet mightn’t have caused the level of fuss that the Redmond company was hoping for, but there’s no doubting that it is a very capable device. Offering the Windows experience as the software maker intended, the tablet-plus-notebook has almost hit the end of its shelf life some nine months after its initial release, and with IFA now underway, talk of its successor has been rife. Today, Neowin has gotten hold of some interesting details pertaining the Surface Pro 2, which will get the customary spec bump as well as a newly-designed kickstand. More information can be found after the leap!

Apple’s MacBook Air range is already reaping the benefits of the Intel Haswell processor, and with the MacBook Pro range also set to follow suit in the near future, it looks as though the next Surface will be able to benefit from the new energy efficient chips. Like its processor, the Surface Pro 2 will be of the Intel Core i5 specification, allowing users to readily complete tasks with ease, and with the Haswell effect bringing an additional two hours of battery life on top of the five already offered by the current model, it’s a general win for productivity.

Notably, it’s looking like there will be two RAM options available to prospective Surface Pro 2 buyers – the standard 4GB and 8GB for the power user. This is not, at this stage, guaranteed, but it looks as though the next-gen slab will carry a very strong list of specs.

Aesthetically, it will probably be more of the same, with a reworked kickstand being the only noteworthy alteration. Essentially, the new prop-up contraption will allow the device to sit in two different positions for added comfort, but overall, those hoping for a radical redesign will have to wait this one out. 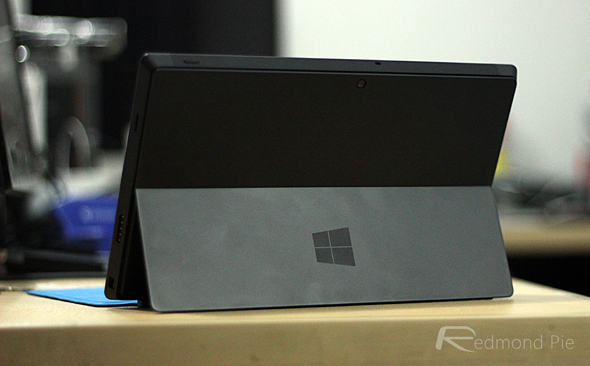 Still, the Surface Pro 2 will be a significant enough upgrade, and while the RT model of the current Surface has taken its fair share of flak, Microsoft is sticking with it – for now. Apparently, its successor will ditch the “RT” moniker and instead be named just the “Surface 2,” but whether this changes its fortunes is really anybody’s guess.

We’ll keep you informed of any developments, so stay tuned!