Samsung’s Galaxy Note 4 was among the first major mobile announcements of this busy month, with the Korean outfit once again utilizing the IFA expo in Berlin, Germany to showcase its latest phablet. With a sharpened display, bumped processor and improved camera, it’s certainly a healthy upgrade on last year’s Note 3, and unsurprisingly, Sammy has been promoting it non-stop. In the latest, the Tizen maker has just rolled out a new ad, and with pre-orders now being taken in the United States, seeks to convince consumers that the Note 4 is the device to own.

Samsung’s decision to wait until after the iPhone 6 arrived before actually making the Note 4 available to consumers was a bit of a Bush League error. Even though the analysts were touting record sales in the months prior to Apple’s launch, Samsung didn’t foresee the ten million sales that its Cupertino rival managed in the first weekend alone. With many potential Note 4 owners probably having opted for the iPhone 6 Plus and its 5.5-inch display, Samsung has sought to bring forward the release from the previous October suggestion, and with pre-orders now in full swing, the company will surely continue rolling out the ads while spending a significant chunk of its famously-sizeable marketing budget. 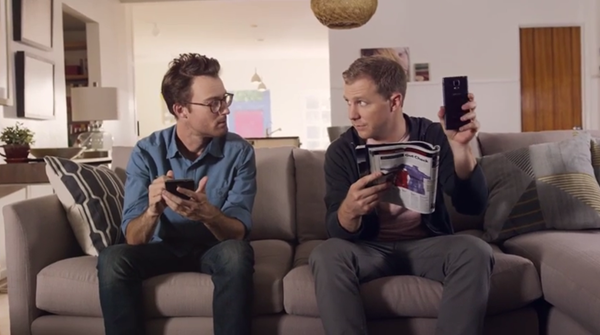 The new ad sees a two friends try and squeeze the word "note" into words. One of the friends kicks things off with "fascinoting," and from there, it all goes a bit downhill. Four minutes of noteisms ensue, and although it does get a little bit cringe-worthy, it’s certainly different.

Personally, even being the geek that I am, I couldn’t imagine playing such a game with my friends, but with one of the guys even trying, somewhat successfully, to get his girlfriend to join, it certainly helped these Note 4 fans to pass the time.

Samsung hopes to sell some 15 million units of the Galaxy Note 4 in the first month, but with Apple’s iPhone 6 launch having gone better than expected, the company may find that some of its target audience have already found a suitable handset elsewhere.

We won’t really know of the iPhone 6’s impact until the Note 4’s sales figures begin to trickle in, though, so for now, check out the new ad below: