Samsung has a humongous marketing budget. Time and again, we see the Korean company spend lavishly on strange, interesting, and simply grandiose PR campaigns, but when it isn’t renaming terminals at London’s Heathrow Airport, the Galaxy maker does occasionally keep things nice and simple. Given that the Apple iPad Air is a direct competitor to the Galaxy Tab S, Samsung thought it would be a good idea to take both to the streets of NYC and record the reactions of consumers asked to compare the two.

The problem with this kind of marketing is that, no matter what anybody thinks, the company behind it is always going to be reflected in a lopsidedly positive light. In this instance, many consumers point out the brightness, and thinness of the Galaxy Tab S, but one has to wonder, before the edits, just what people thought of the iPad Air by comparison. 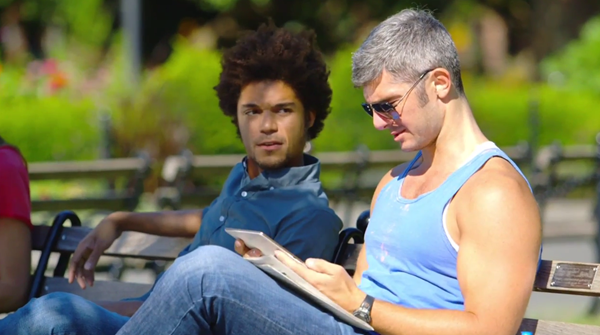 At the end of the clip, a small group of NYC passers-by opt for the Galaxy Tab S in favor of the iPad Air, but despite the encouraging feedback, Sammy still trails its fierce rival by a considerable margin in terms of sales and market share in tablet space.

Samsung has continually called out Apple’s product line-up in an attempt to draw business, but at least last month’s round of ads seemed to focus its attentions more on the tech. spec. advantage that the Galaxy Tab S has over the iPad in many key areas. This shot is less than convincing in that it wouldn’t take any company more than a couple of hours to walk around any town in the world and piece together a 90-second clip in this manner.

Still, striking the proverbial iron while hot is what our beloved tech companies do the best, and with the relatively new Galaxy Tab S reveling in the fact that the iPad Air is nearing the end of its life cycle, don’t be surprised if Apple hits back with some ad campaigns of its own when the iPad refresh takes place in a couple of months’ time.

Check out the ad below, and as always, be sure to leave your comments and opinions via the usual mediums.

Would you buy a Galaxy Tab S or an iPad Air?