Schematics of what is claimed to be the iPhone 7 Plus, or Pro, depending on which rumor you believe, have appeared online after initially being published in the June issue of Japanese magazine MacFan.

The schematics, published online by Japanese site Mac Otakara, show what is rumored to be named the iPhone 7 Plus – the iPhone 7-based equivalent of the iPhone 6s Plus. Featuring a 5.5-inch screen and dimensions identical to that of the current iPhone 6s, the upcoming device will look kind of similar to the current iPhones except for few tweaks, according to the schematics, which does sit well with many previous rumors on the subject while not tying in with every rumor we have come across.

One noticeable difference from the iPhone 6s Plus is the inclusion of a dual-camera setup. Also rumored of late, the inclusion of an extra camera module on the device’s back would almost certainly put paid to any suggestion that the new iPhone will be any smaller thanks to the extra space that would be required in order to accommodate it.

Fans of the headphone jack will be disappointed to see that the leaked schematics also raise the question of audio, with a single Lightning port expected to be the only way to get audio out of the device. Rumors along those lines have circulated for a long while now, and while not everyone is in agreement that it is a good idea, the saving in space alone could be enough for Apple to consider it given the dimensions Apple is working with here.

The schematics also show Smart Connector on the back, which too, has been rumored to make its way from iPad to iPhone for a while now. 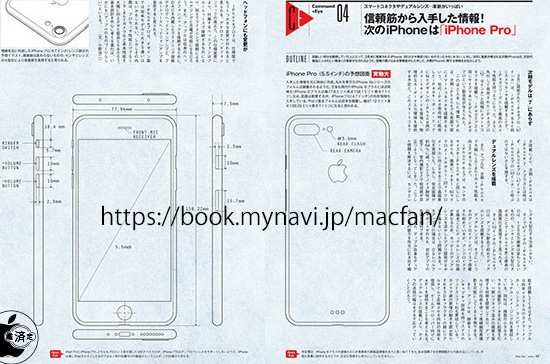 The schematics do not mention the 4.7-inch iPhone 7 and instead focus on the 5.5-inch “iPhone Pro” that looks set to receive the higher-end features again, including the additional camera. We expect the iPhone 7 to be identical, though obviously, smaller and sans that extra camera.

With September still quite a way away, we’re going to have to wait a little while before we know for sure.