Pokemon GO may not demand the same level of attention that it once did, and Nintendo now has bigger fish to fry thanks to the launch of Super Mario Run and the Nintendo Switch, but developer Niantic is still hard at work with its game and it today published a new post in which it announced the arrival of Shiny Magikarp.

Niantic says that some gamers have already begun to discover the new Pokemon, going on to say that sightings of the Shiny Magikarp are extremely rare, so if you do spot one it might be wise to grab it when you have the chance! 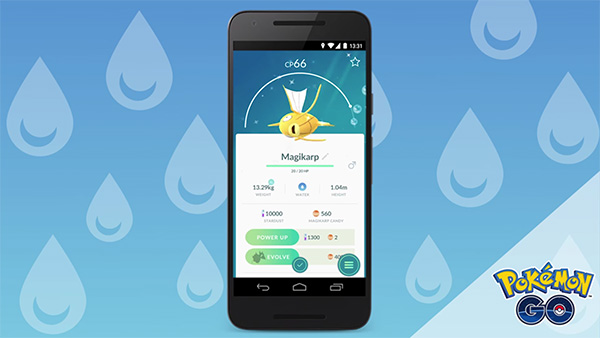 “Trainers across the globe have reported sightings of golden Magikarp in the wild. These Shiny Magikarp are extremely rare, so pay close attention to the Magikarp you encounter while you’re out exploring the world to make sure you don’t miss the opportunity to catch one!”

Keen to take full advantage of the social media hype machine, Niantic also wants gamers to share their story on Twitter should they be able to snag themselves a fancy new Shiny Magikarp. If you do, then be sure to tag the tweet with #PokemonGO. You wouldn’t want to miss the chance of showing other Pokemon GO gamers your rare new find, would you?

While Niantic does say that the new Shiny Magikarp are extremely rare, it has not given any kind of indication as to what the odds are of spotting one when out and about, enjoying the game. Whatever they are, those chances are sure to increase the more you play the game, which is obviously Niantic’s intention here.

If your Pokemon GO fascination was just beginning to wane, now may be a good time to give it another go!

Oh, and yes, if you have enough Magikarp candy – you need a whopping total of 400 – you can, of course, evolve your Shiny Magikarp into a Shiny Gyarados!