There are a number of very capable note-taking apps within the iTunes App Store, and we’ve featured plenty of them here at Redmond Pie. As well as offering a great deal of useful features, it’s becoming of increasing importance that notes can be backed up via the cloud, and Notesy by Giant Yak Software is prime example of solid features mixed with awesome Dropbox support.

It’s tailored properly for the iPhone, iPad, and iPod touch, and besides seamless integration with Dropbox, it’s one of the richest experiences in note taking you’re likely to find for a mobile device. 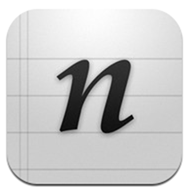 From a visual aspect, it’s nice to look at, and you can pick from an impressive range of sixteen different background colors as well as ten different pen colors.  It’s nice an easy to get to grips with from the get-go, and before you get started, I would highly recommend checking through the simple yet effective array of options within the settings menu, from which you can tailor the experience to your exact needs.

Although most notebook apps offer cloud integration, Notesy really earns its full title of "Notesy for Dropbox" with its impressive support for the popular storage platform. Usually, you’re only allowed to sync one set folder, but with Notesy, you can choose any folder you wish, and also rather uniquely, the synchronization is automatic.

I’d have to say this is one of the best plain-text editors certainly I have had the pleasure of trying out for iOS, and because it’s a universal app, you only need buy it once and it’ll work on each of your iDevices. It costs $4.99, which is more than reasonable considering its powerful features, and I would highly recommend you check it out via the link below.

There are a couple of issues that did bug me a little, namely the ability to save files in various different formats. It’s something I am used to at desktop level, and a couple of other great note apps also offer this feature; but take nothing away, Notesy is a fantastic app.