Google has once again delivered a weighty bundle of features in the second iteration of the famed, ASUS-made Nexus 7 slate, and if you happen to reside in the UK and wondering when you would be able to purchase the heavily-lauded 7-inch tablet, you’ll be pleased to learn that it will hit the Play Store before the end of the month. As confirmed by ASUS, the new Nexus 7 2013 will be available in Britain from August 28th, and with the base, 16GB version retailing at just £199, it offers the same incredible value that made it a hit this time last year.

The Nexus range always strives to offer mid-to high-end features at a reasonable cost to the consumer, and the Nexus 7 tablet has been at the heart of this ethos. The first-gen model was the first device to ship with Android Jelly Bean 4.1 right off the bat, and this year, Google has used the follow-up release to be the very first slab to ship the new Android 4.3 out of the box.

As was the case before, the Nexus 7 arrives in two different variants — a 16GB model, and a slightly more expensive 32GB edition. While the lower-end device will cost £199 to the UK consumer, the 32GB will cost £239, and although that’s quite a significant difference, it’s not too much of a bump for those requiring that extra real-estate for the multitude of content now available to download at the Play Store. The United States always tends to see Google-related products first, so it’s nice to see that the Nexus 7’s gradual worldwide release is beginning to take effect.

As well as offering a snappier processor than its predecessor, the new version also packs a 5-megapixel rear-facing camera, and although, from what we’ve heard, it’s no world-beater, it should offer more than enough bite to suit those looking to simply share images on Instagram and the like. With a 1,920 x 1,200 display also thrown into the bargain, the new Nexus 7 is not a particularly hard sell, and with the previous version having shifted many millions of units, don’t be too shocked if the 2013 offering brings more of the same when the numbers are crunched. 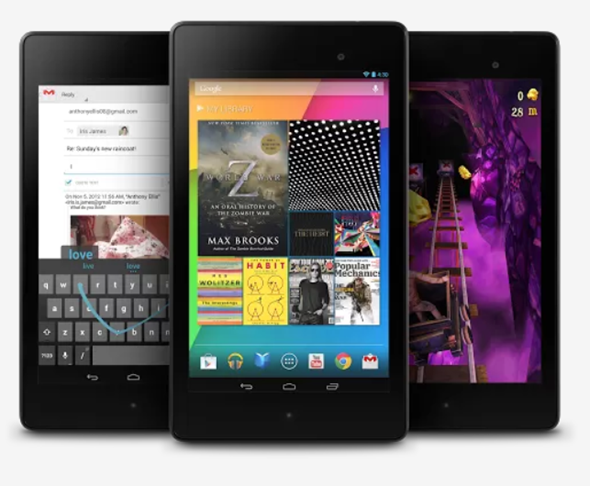