Moments ago, it emerged that Apple had released a minor update for iPhone 5s and iPhone 5c users in the form of iOS 7.0.5. In the release notes, Apple made note of the point that the update amended some issues affecting folks in China, but it wasn’t immediately apparent whether the jailbreak had been patched or not. Now, seasoned jailbreaker MuscleNerd has taken to Twitter and urged those eligible for the iOS 7.0.5 update to refrain from doing so.

The Evasi0n7 jailbreak was released about a month ago, and due to the fact that Apple has been focusing its attentions on iOS 7.1, no end-user update had hitherto been released to counteract the universal untether.

For a while, it seemed as though we may even get iOS 7.1 without any kind of move from Apple to counteract the jailbreak, but as ever, it was a wish too far. It recently emerged that Evasi0n7 jailbreak was partially patched in iOS 7.1 beta 4, and although we don’t know for sure whether a similar tactic has been deployed with iOS 7.0.5, MuscleNerd’s tweets seems indicate it probably doesn’t, but its still best to avoid the 7.0.5 update for now. 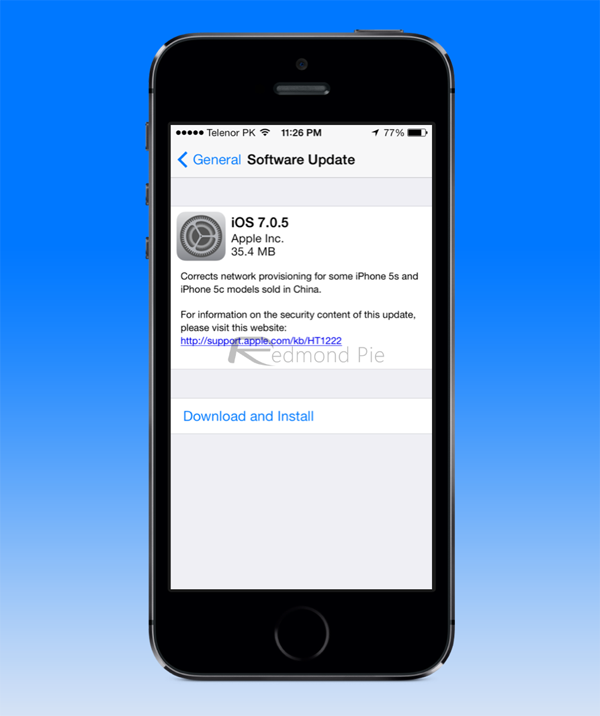 To clarify, this release is only for those in ownership of the iPhone 5s and iPhone 5c. Moreover, iOS 7.0.5 was meant to be a fix for China-only networks, but is also available to those who are in UK/Europe and Asia Pacific.

So, to be as clear as possible, do not update to iOS 7.0.5 if you wish for your device to remain jailbroken. If its not patched, we will likely see an update to Evasi0n7 with support for iOS 7.0.5, but in case it is, there’s no going back – your jailbreak is gone, dead – finito. So yeah, DO NOT update to 7.0.5 yet. 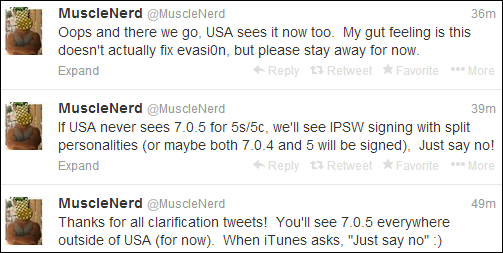 With iOS 7.1 now a few betas in, it looks as though this will be the next major release across the board, with today’s offering probably being the last of the iOS 7.0.x family. As an advanced reminder, as with any new firmware update, do not go ahead and download / install iOS 7.1 if you wish for your device to continue running Cydia, for it will be patched against the tenacious Evasi0n7 jailbreak tool.