More Than Half Of New Mobile Activations This Christmas Were Apple; Samsung At Second Place

2014 has been one of Apple’s strongest years so far. More record-breaking early sales of the iPhone 6 and iPhone 6 Plus threw the gauntlet to its competitors, particularly Samsung, and to cap off a great twelve months, the Cupertino company has also pushed some very impressive numbers this holiday period. A total of 51 percent of mobile device activations over Christmas were of Apple products, and with the company’s inaugural smartwatch effort looming, the Mac maker looks set for yet more dominance as we head on into 2015.

Analytics firm Flurry did the number crunching over Christmas day, and found that more than half of newly-activated devices were manufactured by Apple. While Flurry doesn’t exactly paint a vivid picture as to what constitutes an "activation," iPhones and iPads appeared to dominate most people’s wish lists, with the iPhone 6, unsurprisingly, taking the crown as the most in-demand handset. 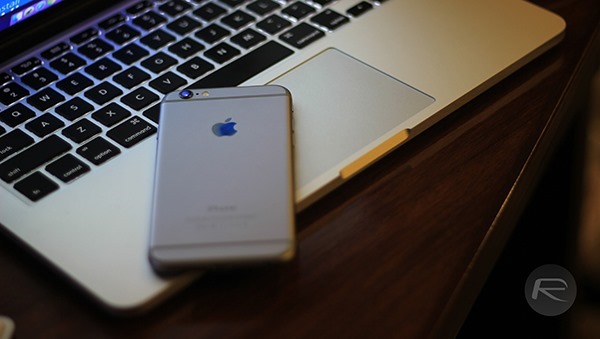 The figures make for yet more unhappy reading over at Samsung, Apple’s bitter rival in most areas of the mobile industry. With a mere 18 percent share of activations, the Korean outfit fell well behind, although it’s no coincidence given the torrid 2014 that the company has endured. The Galaxy S5 sold reasonably well earlier this year, but it wasn’t a patch on the shipments of the iPhone, and although Sammy had hoped to counter the Cupertino company’s latest range with the Galaxy Note 4, Apple’s decision to roll out the larger iPhone 6 Plus was a body-blow to the Note series’ phablet dominance.

Microsoft managed a reasonable 6 per cent, with the majority of activations accredited to the famed Lumia fleet of devices, while Sony and LG shared a 3 per cent portion almost equally. 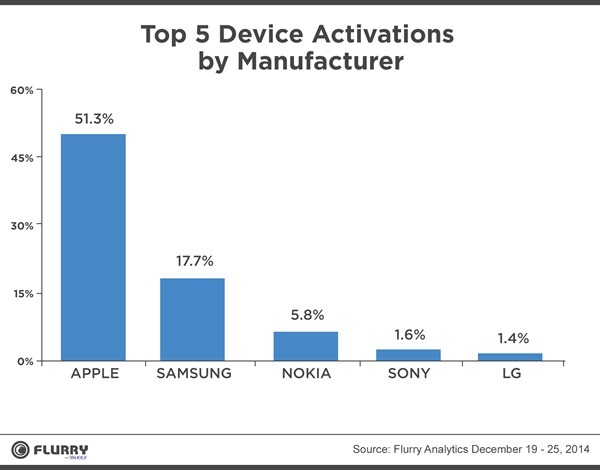 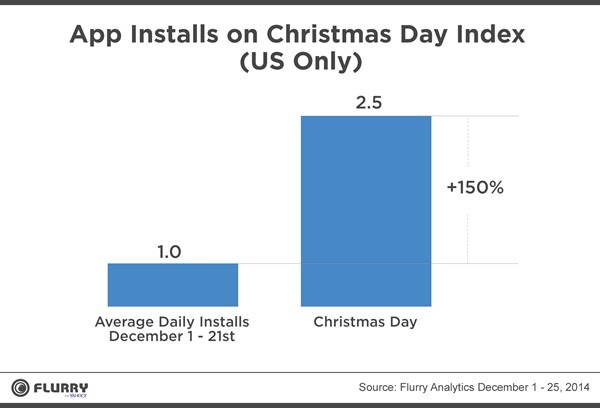 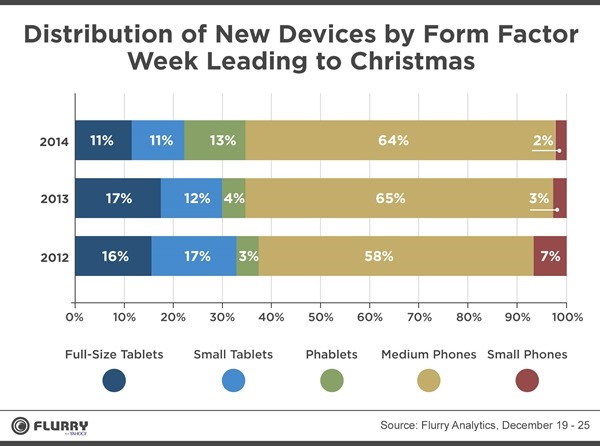 As you can see from the results, phablets are on the rise, with a jump from 4 percent in 2013 to 13 percent this year. As you may also notice, the 10 percent difference appears to have eaten away at the tablet share, which managed 22 percent compared with almost 30 percent last year. This means that while companies are selling more large-screened handsets, consumers are bypassing tablets in the process, which makes sense given that the likes of the iPhone 6 Plus and Samsung Galaxy Note 4 offer comparable display real estate to smaller-sized slabs.

It’s worth pointing out that many nations don’t celebrate Christmas, so in that respect, the numbers may be somewhat skewed. However, there’s no getting away from the fact that this has been very much Apple’s year, and as such, it’ll be interesting to note the response of Samsung et al as we saunter on into 2015.