Xbox Live members, I’ve got some good news and some bad news for you. Which one do you want to hear first?

Assuming you answered with good news: Microsoft has started this new thing where they gift Microsoft Points to Xbox LIVE members on their birthday.

Cool, huh? Well, there’s some bad news to follow, and you’ll have to head past the jump for that!

The news comes from NeoGAF forums where gamer DMczaf has posted the image they received from Microsoft saying, “Happy birthday! from Xbox LIVE Rewards”.

DMCzaf must have been delighted to see Microsoft’s wish along with the prospect of being gifted free Microsoft Points, but their excitement quickly ran out of steam when they realized that the gift was a very small 20 Microsoft Points.

But wait, something is better than nothing though, right? 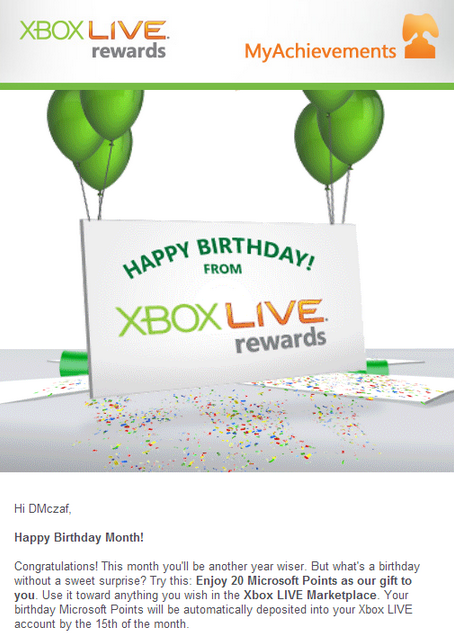 Wrong. You cannot buy anything at all with the 20 Microsoft Points as there is nothing on the Xbox LIVE Marketplace / Arcade to buy that’s worth 20 MS points. Even basic dashboard themes for games like Lost Planet (released in 2007) start at 50 MS points.

But that’s not all. Only members with 3000+ Gamerscore are eligible for the gift, and they’ll have to wait for 3rd week of the next month to be able use the points.

Gamers with 10,000 and 25,000 Gamerscore get slightly more nice gifts in the form of rebates of 1% and 2% (respectively) for each purchase from the Xbox Live Marketplace.

Microsoft could’ve done so much better if, instead of gifting unusable-on-its-own currency, they had decided to gift members with an old Xbox LIVE Arcade title like, say, Geometry Wars: Retro Evolved, or perhaps 24 hours of free Xbox LIVE Gold.

$60/year for Xbox LIVE Gold has been looking like a terrible deal ever since Sony introduced their awesome $50/year PlayStation Plus membership with its discounted prices, free AAA titles like InFamous 2 Red Dead Redemption as part of Instant Game Collection, exclusive titles, and early access to games and demoes. Xbox LIVE users also see ads in their Dashboard and have to pay to play online multiplayer, whereas PSN members don’t have to endure such things.