It really doesn’t matter just how much time, energy, and resources are assigned by manufacturers into the design and development of cutting-edge smartphones as there’s always going to be the odd consumer here and there who imagines something entirely different. Each year we see a number of videos and static images that showcase what a possible next-generation Apple iPhone could look like. This year is no different as we run up to Christmas, with the latest concept for Apple’s 2016 flagship dubbed “iPhone 7 Edge”.

The first thing that immediately grabs your attention is that edge-to-edge display with no bezels on the sides. Featuring a 5.5-inch multi-touch 2K display, it extends to the edge of the casing with a slight curve. 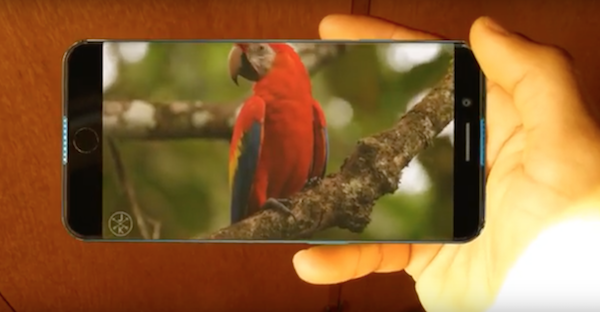 The concept also assumes an 8-megapixel forward-facing “selfie” camera, which is an improvement over the current 5-megapixel offering. The back of the concept iPhone has a 16-megapixel camera module that is kept in place with a cylindrical black placeholder with integrated flash – and well it does not protrude out of the casing. The iconic Apple logo of course still makes an appearance on the back and right in the center of the casing. There are no specific dimensions given for the physical structure of this concept, but purely by looking at what’s being imagined here, it seems that this new “iPhone 7 Edge” is noticeably thinner and lighter than Apple’s current flagship models; iPhone 6s and iPhone 6s Plus.

The concept is imagined running iOS 10 and is powered by Apple’s A10 processor accompanied by a whopping 4GB of RAM. As we all know, Apple prefers to get the best performance out of a marriage between hardware and software rather than chucking in additional RAM, so it’s unlikely we will see the next iPhone shipping with double the RAM of the current iPhone 6s and iPhone 6s Plus.

The entire setup is shown to sport a massive 3,500mAh battery as well, and given the thinner profile of this concept compared to iPhone 6s and iPhone 6s Plus, it kind of looks impossible for a phone this thin to feature such a large battery.

The only good thing to take away from this concept is the edge-to-edge display and the surround stereo speakers setup. Whether Apple will actually implement any of these is another story altogether. But one can always hope, and imagine.

Check out the videos by SCAVidsHD and ConceptsiPhone for yourself and see what you think.