In our installment of today’s new Cydia releases, we present to you another handy tweak. There have been many attempts to bring a decent gesture-based system to iOS, and it seems as though they’ve finally cracked it – well, at least for the lockscreen. 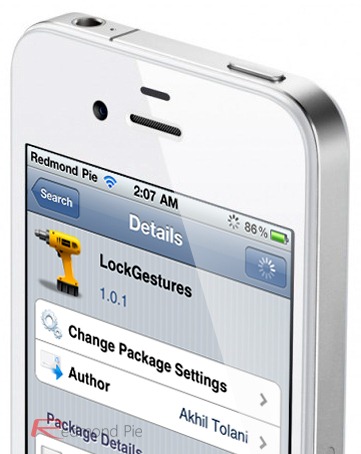 LockGestures, by developer Akhil Tolani, enables you to perform a variety of actions using various different gestures while on the lockscreen. There are many aspects of the iDevice’s behavior which you can control with gestures including a single tap, double tap, triple tap, pinch (as you would if you were zooming in on a webpage), swipe up, down, left and right as well as many others. You can activate any of the apps on your device just by setting one of the commands.

The app certainly cuts out the middleman, and even relieves the burden on the essential SBSettings. You can activate your power options and even change brightness settings with a simple gesture.

For just a mere dollar at the BigBoss repo in Cydia, this is definitely one of those tweaks that once installed, could easily evolve from a bit of fun to an essential timesaver. A lot of the apps available, whether through the App store or through Cydia are hellbent on saving us as much time as possible and turning us into lazy, gadget-dependent shadows of our former selves – this is one of them.

It is strongly suspected that there will be some advanced gesture-based implementation with the next iPhone and its complimentary iOS 5. If this is the case, then maybe this is a little snippet of what’s in store in a few weeks’ time. Recent concepts of Apple’s forthcoming smartphone have suggested gesture based commands on the home button, which could see an increase in size.

If you’re already using iOS 5 beta, you can jailbreak it using tools like Redsn0w (for Mac and Windows), or Sn0wbreeze.