Jailbreakers Beware: iOS 8.4 Release Is Hours Away, Here’s What You Need To Know

iOS 8.4 is only hours away now from hitting download channels with release date and time locked in for June 30th at 8AM Pacific Time. iOS 8.4 brings Apple Music along with a number of fixes for issues like notorious messages app crashing bug, slow Wi-Fi networking, and other security fixes.

Last week, TaiG released an untethered jailbreak for all devices running iOS 8.1.3 to iOS 8.3. While it’s unlikely that Apple will be able to patch these exploits in time for final release of iOS 8.4 given TaiG was released only a few days ago, there’s still no 100% confirmation of TaiG’s exploits working on iOS 8.4 yet. Chinese TaiG team hasn’t confirmed it either. 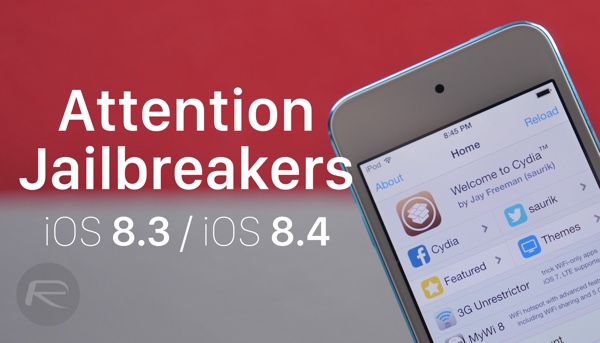 If iOS 8.3 exploits do work on iOS 8.4, which we hope they do, TaiG 2.x will most likely be updated to support the latest firmware. But in case it doesn’t work, jailbreakers will have to wait for a long time before next public jailbreak becomes available again.

So if you are already jailbroken and want to keep your jailbreak, the drill is simple. DO NOT update to iOS 8.4 until there is an official confirmation of TaiG working on iOS 8.4. We’ll obviously post about it here on RP as soon as we get the confirmation. Also, while you are jailbroken, it wouldn’t hurt to save SHSH blobs for iOS 8.3. SHSH blobs may not be useful for downgrading today but who knows they might be in future so it’s worth taking time out in saving SHSH blobs. You can do this using TinyUmbrella, more details on it here.

If you are still running a firmware older than iOS 8.3, it’s time to update to iOS 8.3 now even if you don’t plan to jailbreak yet. Why? Because iOS 8.3 has plenty of security and bug fixes compared to those older versions and it’s the latest jailbreakable firmware. Once iOS 8.4 is released, Apple will stop signing iOS 8.3 after which you won’t be able to update to 8.3.

Also remember to save SHSH blobs once you have updated to iOS 8.3 using TinyUmbrella in case they ever become usable again.