There’s been so much talk, conjecture and wild speculation about the iWatch over the last 12 months that it’s impossible to actually focus on the individual parts of the actual product. Will it be an intelligent watch akin to the Pebble or Galaxy Gear? Are we all barking up the wrong tree by thinking it’s a watch when it’s actually a wearable packed full of health related sensors? Apple’s next product release is fast approaching, meaning that we shouldn’t have to wait much longer for the big reveal, but if you’re of an impatient disposition then why not head over to the Google Play Store and get the iWatch now?

You can always rely on Google’s Play Store and Android developers to be ahead of the game when it comes to this sort of thing. The iWatch app that has recently made its way onto the Play Store has nothing to do with Apple’s rumored hardware, but is instead an animated watch face that has been built to be compatible with all of the square-faced Android Wear compatible devices that are currently available on the market.

The developer behind the relatively simple iOS style watch face describes the offering as the “most amazing animated watch for your Wear device“. The interactive and animatable parts of the installation are triggered by movement of the Wear device to provide a relatively attractive parallax effect. In fact, the whole experience looks as though it’s intended to be a carbon copy of the visual effect that occurs with an animated wallpaper on an iPhone or iPad running iOS 7.x or above.

The app is offered as an entirely free-of-charge download and requires very minimal setup to get things up and running. The mobile device in question needs to be compatible with the Android Wear hardware that the face is being installed upon. It also needs to be paired with the wearable, as is standard practice for anything of this nature. When the app has been installed a simple one-second tap on the Wear device will allow the iWatch watch face to be activated. 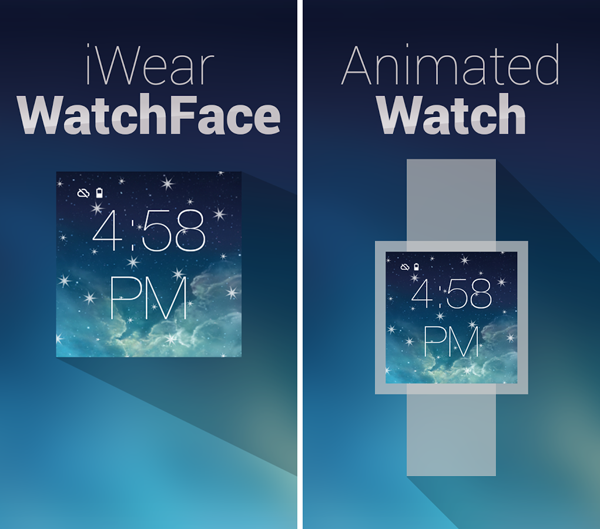 We may have to wait a few more months to see what Cupertino based Apple have in store for us with the actual iWatch hardware, but if you’re an Android user, the chances are you aren’t that concerned with those developments anyway. Go and grab the iWatch app now from the Play Store and try it for yourself.

(Download: iWatch for Android Wear on the Play Store)