iPhone X Plus Vs Galaxy Note 9: Here’s What Apple’s Upcoming 6.5-Inch Flagship Will Look Like Next To Samsung’s 6.4-Inch Phone

With them both being announced within weeks of each other and both being the largest smartphones offered by either company, the Samsung Galaxy Note 9 and Apple iPhone X Plus are predictably being talked about in the same breath.

They’re different beasts but due to their similar size and huge asking prices the pair will always be directly compared, which has us wondering about perhaps the most obvious comparison between the two – just how similar are they, visually?

In reality, apart from the sheer size of the devices, not all that much.

As this image shared by notorious leaker Ben Geskin shows, the Note 9 is a slightly larger physically although it has a smaller display – Note 9 has a screen size of 6.4-inch while iPhone X Plus is rumored to have 6.5-inch screen. That’s thanks mostly to the way the iPhone does away with bezels, for the most part, replacing them with that notch that Samsung is so keen to poke fun at and keep as part of its “forehead” and “chin” bezel.

The design decision lends the iPhone a more “modern” feel, although it’s difficult to look at the Note 9 and think of it as an old design, even if it does have a chin and forehead. You have to give Samsung credit for refusing to go the notch route that every other OEM seems to have gone down during 2018, but it does definitely give the Note 9 a look of something a little aged when compared to the iPhone. 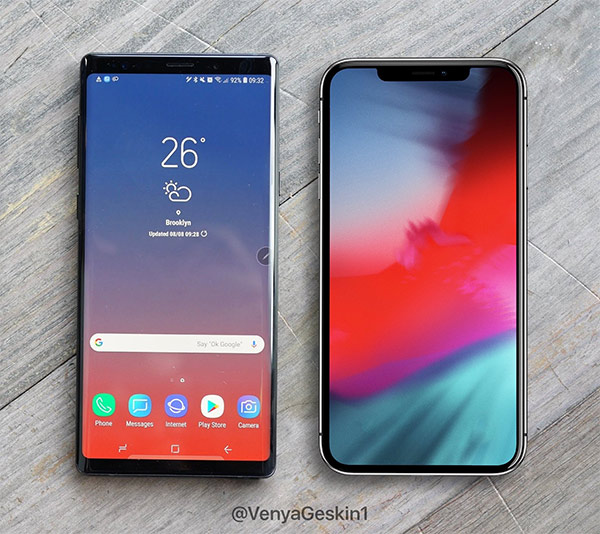 Of course, beyond sheer looks there are all manner of differences between the two devices but performance, cameras and software aside there is one indisputable fact about smartphones at this price point – people want their $1000 and up toy to look like it’s worth every penny of that asking price. We’d argue both do, but which looks the best?

We’ll let you make that decision.