Here’s Apple’s iPhone 7 vs Samsung Galaxy Note 7 side-by-side real-world speed test comparison to see which one comes out on top.

It seems that if you were an early adopter of the Samsung Galaxy Note 7, then you have a little bit more to worry about than just hardware catching fire or exploding when in use. A new video shows that Samsung’s Galaxy Note 7 may have only been released to the public a month earlier than Apple’s iPhone 7, but the Cupertino-based company’s smartphone blows Samsung’s troubled flagship away in the latest speed test to be ran on the two devices. 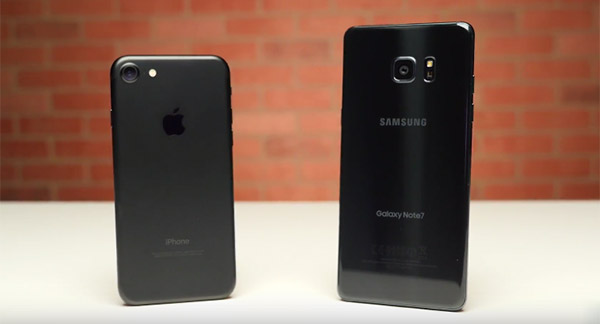 Passionate smartphone owners and regular viewers of speed test videos will already be familiar with the process. It’s not entirely scientific, but the general gist is that you take two different smartphones, and you time how long it takes for those devices to run through two laps of opening up and loading the same apps downloaded from the relevant app stores. The first lap tests how quickly the device can invoke an app from scratch, with the second lap putting the device’s multitasking and memory management to the test.

What’s particularly interesting is that Samsung’s Galaxy Note 7 with octa-core CPU and 4GB RAM actually jumps into an early lead thanks to the short animations in software. But then it all goes down-hill from there. By the time the devices start to load the fourth app, which in this instance is the Asphalt 8 title by Gameloft, the iPhone 7 with 4-core CPU and 2GB RAM (3GB RAM is in the Plus model) powers into the lead by loading the title, content, and even exiting the app to the Home screen before the Galaxy Note 7 has moved beyond the initial splash screen.

And as they say, that’s pretty much all she wrote. We’ve previously seen that even Apple’s iPhone 6s, which was 2015 flagship, was more than capable of outperforming the 2016 Note 7 in this type of test. Now, with this latest device-on-device test with two modern flagships, we can see just how powerful Apple’s 2016 iPhone 7 is as it relatively easily laps the 2016 Galaxy Note 7.

In a real-world environment, users probably won’t be loading and closing apps like in the video, but there are some concerning areas where the Note 7 is concerned, such as the length of time taken to load the Subway Surfers game. With that said, given the issues currently being faced by the Note 7, being defeated by the iPhone 7 in a new speed test is the least of its worries.