Of all the features of iOS hitherto, the Notes app has remained largely untouched, making for a nice, simple – if a little under-featured – note-taking utility.

According to an alleged pre-GM release of iOS 5.1, the fruit company’s newest iteration of the popular mobile OS will feature support for Japanese users of the Siri voice-recognition software, as well as a new slider to the lockscreen – which is said to allow iOS users quicker access to the Camera app features. 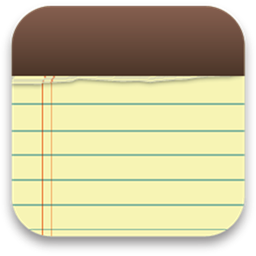 Rumor also now has it that Notes will also be getting a little more attention in iOS 5.1, which is presumed by most commentators to be dropping on 9th March. Currently, one can write, save, and edit notes as well as e-mail them on, but according to a screenshot obtained by the guys over at iPhone Hellas, Notes will offer much more than the simple, one-font, one-format, monochrome text currently seen across iOS:

The screenshot – as well as the accompanying report – tells of a much more inviting set of formatting options including bullet-point lists, links, custom font colors and underlining, amongst others. 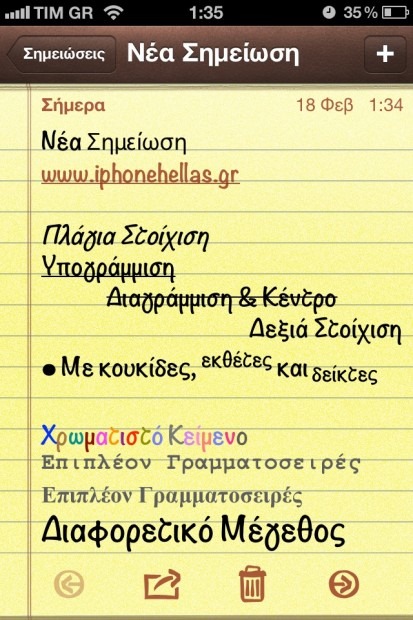 Of course, as you’re probably more than aware, there are many – probably hundreds – of better, feature-rich note-takers doing the rounds on the App Store, with even some of the better ones retailing at minimum price. Notified and Penultimate are two personal favorites, both of which eclipse what Apple is offering in every department. However, there’s no doubt most of us would prefer stock apps to be improved – lessening the need to dig into our pockets – so these changes will surely be more than welcome.

March looks set to be a busy month, with the possibility of an iPad 3 announcement on March 7th arguably the hottest topic in tech right now. We discovered yesterday that the device will pack the hugely sought-after Retina display, and with that in mind, Apple’s emphasis on adding a little color and flair to Notes is understandable.

Hopefully, you guys are as excited as we are about the prospect of the releases, and we will of course be covering it here in grave detail as the announcements are made, so stay tuned!