Infographic: What’s Life Like Without iPhone Apps For 4 Days?

A new study by Internet auction house eBay has drawn perhaps the least surprising conclusion on our mobile usage habits, discovering that we are, collectively, addicted to apps. Having challenged 200 iPhone users to go four whole days without their favorite mobile apps, eBay found that a whopping third of participants could not go the distance, while more than half were less happy without streamlined access to their content.

A smartphone wouldn’t quite be a smartphone without the vast range of apps currently available, and so this experiment has proved. Some users were lost without their access to news, others without the convenience of a camera everywhere they went, while one user had to cave in and consult their navigation when lost; the days of reading paper maps are, it would seem, long gone. 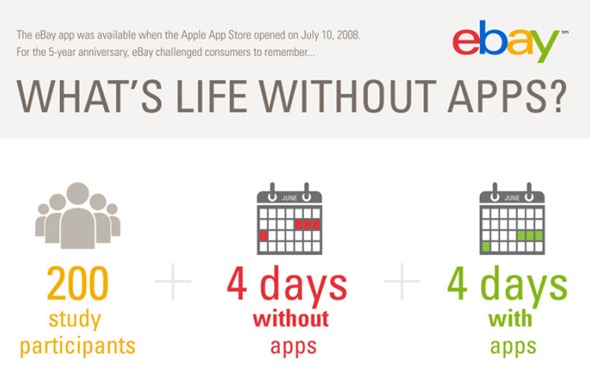 Although our addiction to apps can be of counterproductive at times, there are plenty of useful ways to consume them. When access to apps was reinstated to the participants of the study, almost half went on to catch up with news. Almost a quarter began budgeting their financial affairs, while a further 23 percent decided to meet up with friends and family.

What the study also shows, if it was ever in any doubt, is that we’re becoming particularly reliant on our cameras. I, for one, and guilty of this, since rarely a day goes by where I’m not taking advantage of my smartphone’s substantial point-and-shoot abilities, and one of the first courses of action the subjects of the study took was to take picture.

Not only did the majority of participants describe themselves as “happier” when reunited with their precious apps, but a large portion also felt “calmer” and “less frustrated.” With studies also pointing at smartphones as a cause of stress, it would seem like a vicious cycle, whereby addiction causes folks to become unsettled yet the abstinence only heightens stress levels.

Although the study only covered iPhone users, I would suspect the statistics would not be much different for those on Android, or any other mobile platform for that matter. With the ability to take photos, send emails, browse the Web, listen to music, create music, play games and all the other features we’ve accustomed ourselves to, it’s hardly a surprise that the 96 hours were such a challenge to those involved in the study.

Could you have gone the distance?