Facebook home is certainly the talk of the town right now, both thanks to the recently released HTC First handset and the equally new Facebook Home software release for Android. As is always the case with such highly interesting and well reported technology news, a comic strip has cropped up based on it.

Poking fun at Facebook is always comical. Posting fun at Google is equally as enjoyable. Managing to combine the pair is the kind of thing that dreams are made of, which is why we suspect it was always inevitable that such a comic would exist. That said, it’s actually a comic that appears to be very much based on reality.

The story follows Facebook’s Mark Zuckerberg talking to Google’s Larry Page via the social network’s new Chat Heads. Zuckerberg promises that Facebook will not fork Android, which is something that many had anticipated. Instead, he says he will simply layer Facebook Home right over the top of Android, putting it in so many places that everyone will simply forget that Android exists.

Whilst obviously aimed at making people laugh, the comic actually has a point.

With Google happy for the likes of HTC and Samsung to layer their own software on top of Android, the company has seen its mobile operating system storm to the top of the usage charts. Real users – not people like us, but our parents, our children and the man down the street – probably don’t really understand that Android sits underneath there somewhere.

So what happens when a company as famous, as well known and as popular as Facebook gets in on the act? It’s already highly likely that people will walk into a store and ask for ‘that Facebook phone’ when shopping for the HTC First. Do they realize Android is on there somewhere? Do they care?

Probably not, but does Google really care either? Everyone knows Google business model revolves around getting people online, and they do that regardless of what skin sits on top of Android. In fact, Google wins whether people use Android or iOS. Or Windows Phone, for that matter.

So, does Google care that Facebook Home hides Android so well? Probably not, no. 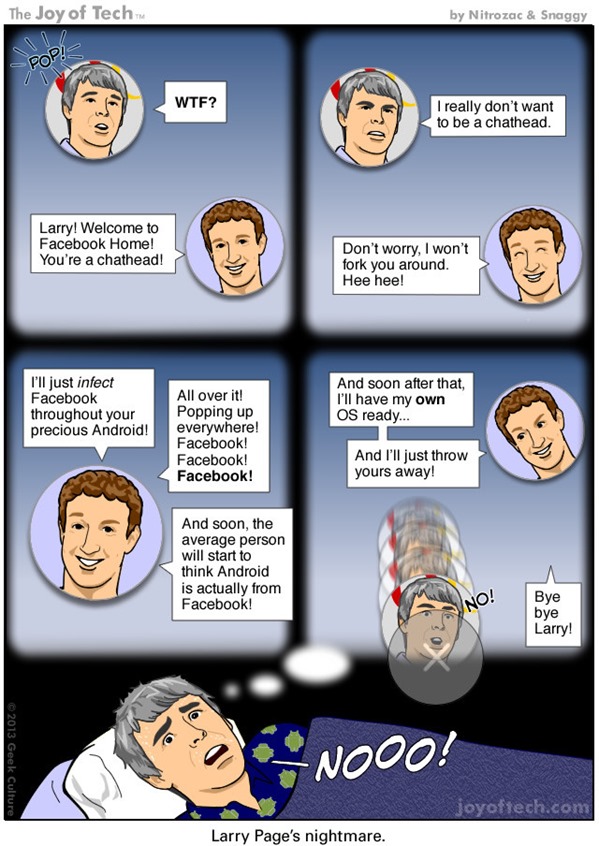