Despite being an open mobile operating system which offers more freedom than competing platforms, Android comes with a bunch of small but nonetheless frustrating limitations. One such limitation is Gmail’s limited support for different file formats; it plays well with things like PDFs, DOCs and AVIs, but when it comes to ZIP files and other, lesser known formats such as 7z, the popular email client simply denies the user from downloading it. Further, Gmail doesn’t let you save attachments to specified locations on your device’s internal memory or SD card.

Both of these shortcomings are easily solved with an app we’ll be talking about in this post. Check it out after the jump!

Developed by Poofinc Studios, Gmail Attachment Download is an easy-to-use app that lets you download any attachment from Gmail and place it anywhere on your device.

Gmail Attachment Download doesn’t come with any app icon and is only activated when you attempt downloading an attachment from Gmail, so it is more of a plugin than a standalone app.

To get it to work, you simply press view/preview in Gmail and select Gmail Attachment Download when the option comes up. This launches the plugin from where you can select the exact path where the attachment will be saved. You then tap Save file and voila!, the attachment is saved for later use.

We’ve tested the app on a Samsung Galaxy S II (Android 4.0.3 ICS) and can confirm that it works as advertised. 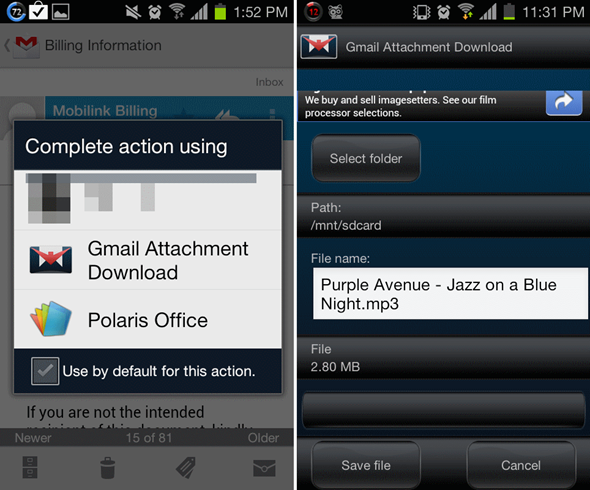 Gmail Attachment Download is more of a necessity than anything else. If you use Gmail on your Android device (who doesn’t?), you really need to install this app.

Gmail Attachment Download is a free, ad-supported app [Google Play]. It works on all Android devices on version 2.1 and up. The app also apparently works on other email clients, but we weren’t able to test this.