As smartphones have continued to advance over the past few years, so too has the quality of displays, and with visible pixels quickly becoming a distant memory, LG Electronics has just shown off a 5.5 inch display boasting an incredible 2560 x 1440 resolution. This places it alongside the Apple Thunderbolt display in terms sheer number of pixels, and considering how much smaller this new panel is from LG, one cannot even begin to decipher how crisp the aptly named Quad HD LCD panel would be on a phablet.

The problem the smartphone market currently has, as pointed out by a number of companies as well as analysts, is that it seems to be under the illusion that more megapixels, processor cores, and an increase in RAM is the solution to evolution. Yet, as the camera of the HTC One has proved, simply pushing the numbers up isn’t always a necessity, and considering how great the displays of the likes of the new Nexus 7, HTC One and iPhone 5 currently are, was there really a need for LG to go so far with the Quad HD?

Certainly not, and while some would already consider 1080p on such a small display to be overkill, there’s no doubt that LG’s mini-Thunderbolt approach is way beyond what most of us would deem to be necessary.

Moreover, such a display would require an even more powerful processor to keep things ticking over as smoothly as with a standard 1080p offering, and more cores equate to more cost – a cost born by the consumer.

Then again, with Apple now having to throw in fingerprint sensors into iPhones and Samsung regularly offering an abundance of features that some, or perhaps most, would deem to be rather gimmicky at best, is it simply the case that the smartphone market is hitting a plateau? 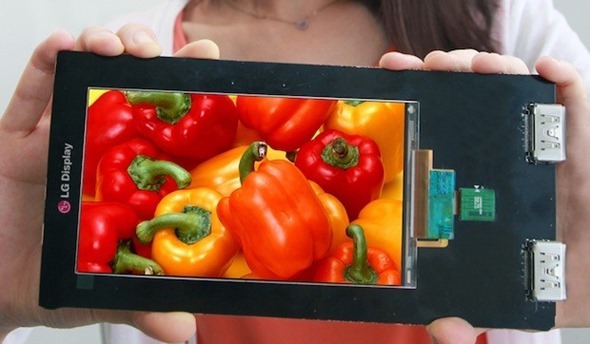 Last year’s devices are still very much competent today, and it appears as though the major players in the game are now struggling to find present the consumer with reasons to go ahead and upgrade.

Like Apple’s Thunderbolt, LG’s Quad HD is an IPS display, offering wider viewing angles than your traditional AMOLED. It remains unclear when the display will be used on a phablet, but you can bet that when it does, it will be a very costly affair indeed.