Here’s how to fix Snapchat ‘Your account has been temporarily locked’ issue when using jailbreak tweaks like Phantom or Snapchat++ on jailbroken and non-jailbroken iOS devices.

Snapchat has done what a lot of thought was the inevitable, and started locking accounts of those individuals once again that it has determined to be using jailbreak tweaks for modding Snapchat, or sideloading the modified version of Snapchat onto their device in the form of Snapchat++ or Phantom. It’s certainly not ideal to launch Snapchat only to find that an account has been locked, but all hope is not lost.

It seems coincidental that the decision to lock accounts has coincided with the rise in popularity of the tweaks like Phantom and Snapchat++.

As is more often than not the case in instances like this, the jailbreak community has come to the rescue of those with a blocked Snapchat account running on a jailbroken device by releasing a tweak that removes the lock, as well as a new version of light Phantom that looks to enhance Snapchat while evading detection and account restrictions.

This is what users with locked accounts are getting right now when using Snapchat:

Oh no! Your account has been temporarily locked. For details on why this might’ve happened  visit https://www.snapchat.com/locked 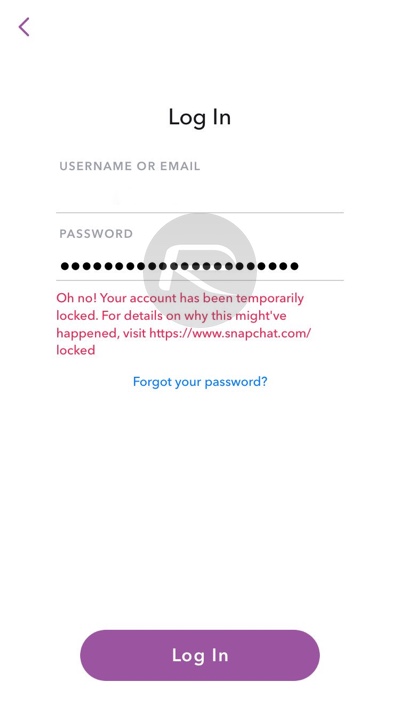 Here’s what you need to do to get around the problem:

If you are among those who have sideloaded Phantom or Snapchat++ on a non-jailbroken device and now have your account locked, simply uninstall these tweaks and install the official version of Snapchat from App Store and then try logging into Snapchat after 24-48 hours have passed since the ban. This should help you get access back to your locked account.

Jailbreak users have more options, and they are detailed as follows.

Same procedure as the one explained above in non-jailbreak users section.

Step 1: If Snapchat is running on your iPhone, regardless of the account being locked or not, then you’re going to need to kill it from running processes and remove it altogether from the backgrounded apps. You can do this by double tapping the device’s Home button and swiping up on the Snapchat app to close it.

Step 2: Now that Snapchat has been removed from multitasking tray, and is essentially no longer running on the device, you’re going to need to download the ‘No Snap Lock’ .deb file from here. You will need to do this using Safari on the iOS device in question.

Step 3: With the .deb file downloaded, you will need to install it onto the jailbroken device by using iFile, which can be downloaded for free from Cydia.

Step 4: Once the tweak is installed, run Snapchat again and try logging in. This time it should hopefully log in successfully. This tweak basically removes the account lock from the locked Snapchat account. But, be warned, there’s no immediate guarantee that a lock won’t occur again going forward.

Step 1: Install the latest version of Snapchat directly from the App Store.

Step 2: Remove Phantom and all other Snapchat related jailbreak tweaks from your device via Cydia.

Step 3: Head over to the Snapchat’s unlock page here https://snapchat.com/unlock to get the restrictions from your account removed.

Step 4: Log in to Snapchat on the installed device as normal.

Step 6: Download and install a file management tool such as iFunbox onto your computer.

Step 7: Grab an older version of Snapchat from iTunes on your computer, or from anywhere else, and then install it on your device using iFunbox. This can be achieved via the large green Install button on top. The whole point of doing this is to essentially install any previous version of Snapchat that doesn’t contain the latest jailbreak tweak checks.

Step 8: Once the older version of Snapchat is installed, do not open it yet.

Step 9: Now install Phantom or any other Snapchat jailbreak tweak from Cydia.

In order to best prevent this from actually happening again, it’s now possible to install a “Lite” version of the Phantom package that is only capable of uploading images and saving direct snaps. The hope being that this wouldn’t actually trigger a ban or lock of an account to occur, although it is still possible. You can get this Phantom Lite by adding the Coke Pokes repository to Cydia with the following URL: cydia.cokepokes.com, and then searching for and downloading the Phantom Lite package.