The official Facebook app for iPad has just been updated, adding a few intriguing new features that allow gamers to discover titles they may be wish to play, as well as entertainment topics that may pique their interest. There’s also an all-new column on the right-hand side that makes the whole app a tad easier to navigate in landscape mode, and its presence follows a similar feature implemented to the desktop version of Facebook earlier this year.

Mark Zuckerberg and Facebook have, particularly since becoming a public company following the well-documented IPO, been looking to expand and improve the range of apps for mobile devices, and while Android has proven to be a bit of a hotbed for experimental features like Facebook Home, the social network has still consistently looked to cater to those on iOS. 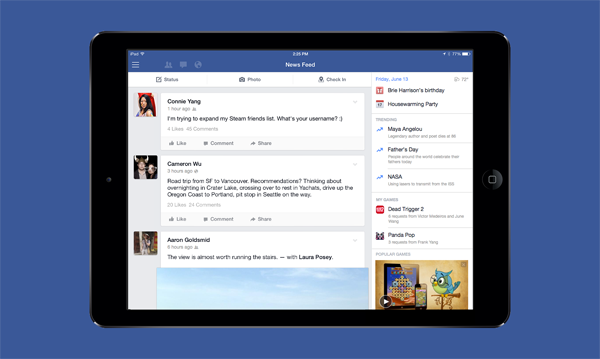 Naturally, the iPhone app has been given more attention, which makes sense given that the Apple smartphone has a far greater reach than its iconic tablet, but nevertheless, today’s update seeks to make the Facebook experience even more integrated and discovery-orientated.

As noted in the company’s official blog post announcing the update, a whopping 70 percent of Facebook for iPad users across the globe “played a Facebook-connected game in the past 90 days,” and as such, the new section dedicated to gaming makes a great deal of sense. The long-term plan for this gaming hub is to facilitate game-related ads, allowing developers to engage with target audiences, although for now, it would appear that Facebook is just looking to add emphasis to the clearly popular idea of gaming through its social network.

The complete set of changes to the Facebook for iPad app are as follows:

As well as gaming, Facebook has also bundled features that help users discover content relating to trending topics and videos. When placed into landscape mode, the new right-hand column takes the UI into a similar dynamic to that of the desktop version of Facebook, and given how popular the trending topics feature has proven to be since rolling out back in January, this is a welcome addition to the Facebook for iPad app.

At present, these new features are restricted to the US-only, should this roll-out proceed without incident, expect the worldwide audience to benefit in the not-so-distant future.