We’re probably all too familiar with Facebook’s photo tagging feature. It lets users easily identify a person on one of their photos by setting an area around their face or body and tagging it with the person’s name. 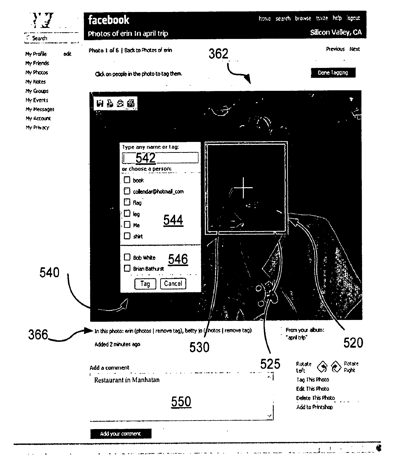 The mockup above, despite the Windows XP-like controls and the whole thing being black and white, clearly depicts the feature’s current implementation. This invention was created by Mark Zuckerberg, CEO of Facebook, Aaron Sittig and Scott Marlette, designer and engineer respectively. The patent was filed on October 11 2006, according to the US Patent Office‘s webpage. As you can tell, filing patents in America isn’t as easy as it looks.

The filing of this patent will likely have no implication on the website’s functionality. That said, it might affect the functionality of other websites, since Facebook is now allowed to sue other developers who dare to create similar features. Of course, since the patent was filed, many high-profile applications have added tagging, including Apple’s very own iPhoto. That said, a lawsuit from Facebook is very unlikely.

Fast-forward to today, despite stiff competition, Facebook’s photo sharing has managed to stay afloat, seeing over 100 million uploads a day, mainly due to its perfect synergy with all the rest of the website’s features. Tagged photos will link to the user’s profiles, who can then be “friended”, only making the attachment to the site deeper. Static pictures have essentially been made social, which is an incredible strength for the site. Furthermore, tagging is now essentially all over the site, not only photos: even status updates can be tagged.

Facebook generated a lot of controversy when, in 2007, it introduced targeted ads. Aside from being based on user preferences and location, the advertisements included pictures of friends, causing people to feel uneasy about their privacy. The company was also flooded with criticism last year when it introduced new privacy settings, generally softening up the default settings and changing them without clear consent from users. The website has since attempted to address criticism with subsequent updates.

Facebook has filed another patent recently, this time related to search, which changes how results are displayed based on the user’s social proximity and how often they access a certain page. That future is live and usable right now (that’s what makes your most visited profiles show up first during searches), but judging by how long this patent took to be approved, it probably won’t be approved until 2016.