Face Unlock For Nexus S Available In New Android 4.0.3 ICS Custom ROM, Here’s How You Can Install It Right Now!

Nexus S-toting Android enthusiasts who were feeling left out on not getting Face Unlock for their device in the Android 4.0.3 Ice Cream Sandwich will be pleased to know that an independent developer has managed to port the feature to the Nexus S and as included it in a custom ROM. We’ve got the step-by-step guide on how to flash this ROM right after the jump!

Because of the Samsung Nexus S’ VGA front camera, face unlock was left out of the official and AOSP builds of last year’s reference phone.  You know where this is going — the files have been yanked out of the Galaxy Nexus and face unlock is working in all it’s gimmicky goodness.  It’s even working with a beard and glasses.

Note: This guide is for the GSM Nexus S only. If you’re using a CDMA-based Nexus S, you can check out its official thread here for instructions.

To follow this guide, your Nexus S must be rooted, have ClockworkMod Recovery flashed and enough space on internal storage to hold all the required files.

Do not extract them.

Step 2: Place all of these files directly under /sdcard directory on your Nexus S.

Step 3: Shut down your Nexus S. Press and hold Volume Down + Power buttons to boot into ClockworkMod Recovery.

Step 4: Take a nandroid backup from backup & restore > restore. This may come handy later on if you wish to revert back to your current set up.

Step 5: From the main menu, wipe data/factory reset. Also be sure to

Step 7: Once you have flashed the four files, select reboot system now from the main menu. 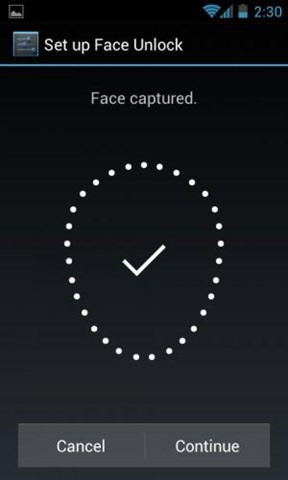 If you followed the steps correctly, Android 4.0.3 Ice Cream Sandwich with Face Unlock will be installed on your Google Nexus S.