Epic Games – the studio behind Xbox 360 hits like Gears of Wars 2 and Unreal Tournament 3 – has released the first trailer for their Unreal Engine 3 based iOS game Infinity Blade… and it looks amazing. 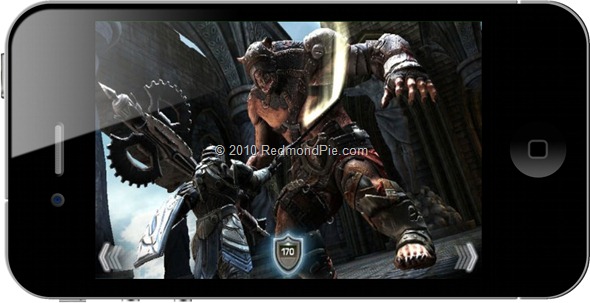 From the video’s official description:

Epic Games and Chair Entertainment’s debut "Infinity Blade" trailer. "Infinity Blade," will be available for iPhone, iPad, and iPod touch this holiday season. Originally introduced as "Project Sword" during the September 2010 Apple Special Event in San Francisco and featured in the latest ad campaigns for iPhone 4 and iPad, ChAIR’s ground-breaking new game will be the first to bring the power of Epic’s Unreal Engine 3 to Apple’s world-class gaming platforms.

I bolded ‘looks’ for a reason here: Too many a times, I’ve come across a game that focuses too much on graphics, often leaving gameplay and general ‘fun’ to be of secondary importance. From the trailer (embedded below), it seems that Infinity Blade just might face the same problem.

There is no need to explain on just how jaw-dropping Infinity Blade looks. It’s the gameplay that needs of equal excellence; I sincerely hope it doesn’t end up being a swipe-fest (a la Fruit Ninja), or it will get boring real quick!

Infinity Blade slated to release this holiday season (next month) and, chances are, it won’t work on older iOS devices like iPhone 3G / iPod touch 2G.