One of the major implementations that Microsoft is making with Windows 10 is to further unify its rather fragmented platform. After Windows 8, Windows RT and Windows Phone 8, the software giant is touting a system that offers optimal, fully-fledged Windows experiences irrespective of the device being used. Underlining this, the company has just taken the wraps off Continuum for Phones, a Windows 10 for Phones feature that will allow smartphones to morph into desktop PCs when connected to larger displays.

Even back when Windows 10 was first showcased last year, Microsoft made it clear that the aim would be to bridge the gap between all devices running on its software. Microsoft is making it much easier for developers to make apps that automatically adjust to the environment they find themselves in, and so when a smartphone does transform to portray a desktop layout when connected to an external display, it’ll be largely thanks to groundwork that has been put in behind the scenes. 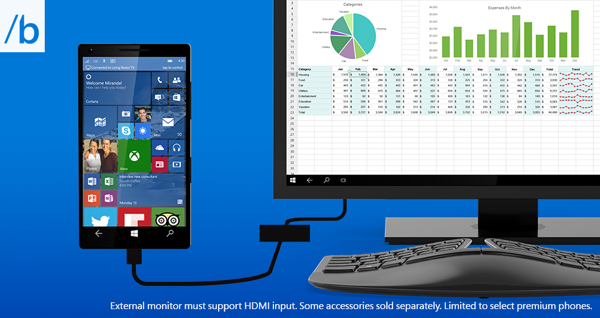 Microsoft’s Joe Belfiore took to the stage today in order to show the world how everything works, with apps like Excel replicating the desktop experience seamlessly when running on a monitor via a Windows 10 smartphone. The company had made a point of ditching the “Windows Phone” moniker for good, marketing its next move as “Windows 10 for Phones,” and with features like this, smartphones running Windows 10 will be taken much more seriously from a productivity aspect.

As well as being useful for the likes of Office, one would imagine that a smartphone’s list of uses as a makeshift computer could be endless, and as such, it’ll be very interesting to see where this goes.

Despite an impressive demonstration from Belfiore, it should be noted that this feature won’t be available to every device. Smartphones compatible with Continuum for Phones will need to meet certain requirements to offer second-screen support, and in good time, we’ll surely learn more of the specifics.

Call us dreamers, but we are hoping that the next step will be a smartphone that can project the desktop display onto a wall or flat surface. Now wouldn’t that be incredibly cool?

Let us know what you make of Continuum for Phones by shooting us a comment in the section below.