Based On Latest Leak, Here’s What iPhone 8 Will Likely End Up Looking Like

One of the wonderful things about the lead up to any major smartphone release is that we can generally get a fairly good understanding of what is going to be announced months before the actual event.

That’s usually down to being able to piece together individuals leaks to get a clear understanding of the bigger picture. Based on the most recent iPhone 8 leaks – which include a dummy unit being shared as well as new schematic drawings – we finally have a visual of what Apple’s new hardware will look like, and it is stunning.

The latest series of leaks have given us a clear indication that Apple’s iPhone 8 will ship with a stunning new design, including an edge-to-edge OLED display with hardly any surrounding bezel incorporated into the design. The top of the device will likely have a small cut-out in place for the forward-facing camera, microphone, and any necessary sensors, and the Touch ID sensor will be embedded under the display on the front, rather than on the rear of the device as previously speculated.

Apple will also change the orientation of the rear-facing camera from horizontal to vertical for AR and VR purposes.

The attached images are based on that specification but have also been appended with a screenshot overlay on the front of the device as part of an effort to give us a clear visual on what the device could look like when the lock screen is illuminated.

This is by no means an “official” representation of the iPhone 8, but given the reliability of recent leaks and the fact that a lot of new information corroborates previous and ongoing reports and speculation, it’s most definitely the best guess that we can have at the moment as to what Apple’s new hardware will look like when it’s released later in the year. 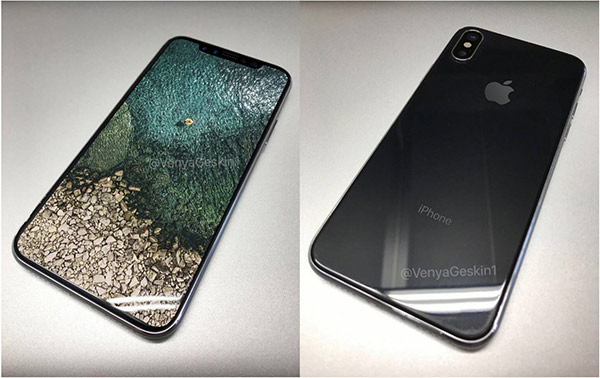 There are likely to be minor differences between what we are seeing here and what Apple actually ends up releasing later this year. However, the imagery does give us a glimpse at just how beautiful the on-screen imagery looks when put alongside the almost non-existent bezels surrounding the panel.

We’re expecting a few more notable leaks before the September reveal, but for now, how do you feel about Apple’s iPhone 8? Will you be lining up to spend your money come release time?