With the new, improved Retina-ready iPad set to hit our doormats and retailers shelves around the world in less than two days, one would imagine that there are plenty of gadget fans out there who are currently sitting on their iPad 2 which they probably want to get rid off in order to get the shiny new iPad. After all, the iPad 2 is so last week and come this Friday, it will no longer be the current model, meaning owners will inevitably want to replace it.

Some iPad 2 owners managed to cash out early, way before the new iPad was actually announced and therefore managed to get a fairly decent price for it through secondary sales channel. Unfortunately for those who didn’t, when Apple took to the stage in San Francisco to announce the new iPad, they also announced price cuts for the existing iPad 2 model, meaning consumers can pick up a brand spanking new one from Apple Stores for a snip of its original price. As you can imagine, Apple’s decision to keep the iPad 2 on sale at a lower price point has a knock on effect for all those people wanting to sell on a unit which could be twelve months old. 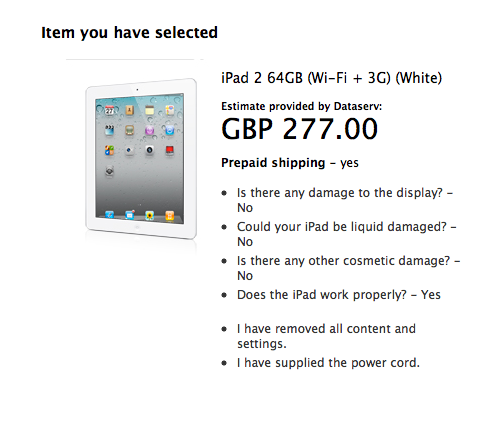 Some good news for those individuals with the fact that Apple is updating their Reuse and Recycling program, which allows Apple product owners to exchange the item in return for gift cards that can be used to purchase Apple goods. The program covers iPhones, the original iPad and Macs but with the latest update, the program now has immediate coverage for all iPad 2 models. The program works in exactly the same way as other recycling and trade-in programs, which is to take details about the model and condition of the product and then produce a value based on that information. The Next Web are reporting that the top of the range iPad 2 model, in fully functional and working order could net owners up to a maximum of $320 which appears to fall in line with other services of the same nature. They have also included some recycling pricing points for the other various iPad 2 models:

The pricing is heavily dependent on the condition of the device and things like cosmetic damage, wear and tear, personalized engraving or possible water damage would more than likely significantly reduce that estimated gift card value. The service is also being extended by Apple to be available in additional countries and I can confirm that the United Kingdom version has been updated and is functional. Although, the price offered by Apple for a top of the range model iPad 2 in England is not likely to make people want to part with their device.

If you have an iPad 2 which you’d like to part with, then head on over to the Reuse and Recycle page and see what Apple will offer you.