A week ago, we told you that Apple’s latest update to the Watch OS, which pushed the version number to 1.0.1, displayed erratic behavior with respect to heart rate monitoring. Well, now Apple has clarified that this, in fact, isn’t a bug, but rather desired behavior in the new version of the Apple Watch OS.

To put things in context for our readers that aren’t either aware of the problem, or have yet to notice this, Apple Watch used to record the wearer’s heart rate every ten minutes. However, with the 1.0.1 software update, users began to notice that this frequency had considerably reduced, and that the device was recording heart rate at ten minutes intervals, but it skipped several iterations in between without any apparent reason. This led the tech community to believe that Apple had inadvertently introduced a bug in Watch OS 1.0.1.

To clarify things on the subject, Apple updated its official website for Apple Watch’s heart rate monitoring feature, stating that the watch “attempts to measure your heart rate every 10 minutes, but won’t record it when you’re in motion or your arm is moving.” This means that if you are active whilst using the watch, your heart rate will not be recorded.

This “clarification” from Apple has caused quite a wave of anger in the user community, who believe that Apple has stripped the Watch of a neat feature through this software update. This is further fueled by the fact that there is no apparent reason for Apple to do so; not at least that is official. Some people have speculated that it might be a move on the Cupertino company’s part to further improve battery life, but real-life test cases have shown no change in that department of the Apple Watch after the 1.0.1 update. 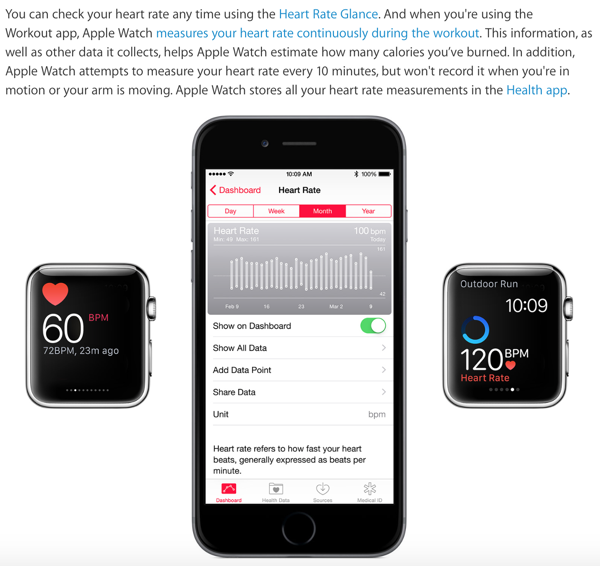 If you are an Apple Watch user and have been irritated by this “feature,” you can use a workaround in starting a workout on the Watch, which will force record heart rate continuously. Of course, it’s nothing compared to what the wearable was natively doing with the 1.0 software, but until Apple reconsiders its decision or offers another solution, this is probably your best bet.