A number of new research studies into the effectiveness, responsiveness and overall quality of smartphone and tablet touchscreens has found that Apple Inc. is still leading the pack. Mobile ad company Agawi has been putting a number of popular iOS and Android devices through their paces in an attempt to measure the performance of the touchscreen technology on the device, with the results putting the fruit company way ahead of the competition.

Agawi’s TouchMark tests were carried out with the aim of determining the touchscreen latencies of a number of flagship smartphones and tablets that are currently being offered to consumers. As part of the test, the mobile ad vendor put a number of different devices under the microscope including Apple’s iPad, Microsoft’s Surface and a number of popular Android slates from varying manufacturers. Although there is quite a complex methodology, being the extremely accurate tests, the basics are that the company measured the time taken for the device to update the display based on a user’s touch. 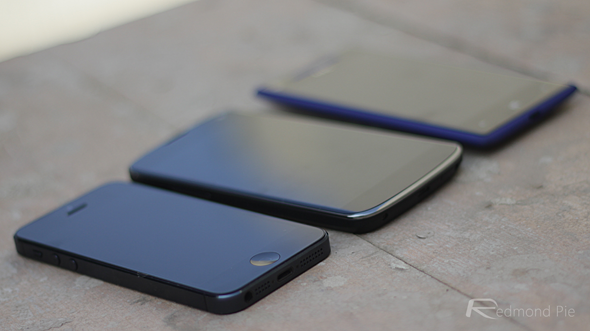 Some of the more well-known devices that featured in the tests included the iPhone 5, the Amazon Kindle Fire HD, the Microsoft Surface, Samsung’s Galaxy Tab 3 and the NVIDIA SHIELD. Although Agawi themselves have actually stated that the results are "unsurprising" it may come as a shock to the average consumer that even Apple’s older hardware such as the iPhone 4 dramatically outperforms a lot of the current-generation competition. In the smartphone category, the Motorola’s Moto X faired the worst with a response time of 123ms. The HTC One and Nokia Lumia 928 followed closely with a response time of 121ms and 117ms respectively.

Apple’s miniature iPad managed to find itself sitting at the top of the crop in the tablet tests. The device response time of 75ms was only marginally faster than its bigger iPad 4 brother with NVIDIA’s SHIELD in hot pursuit at 92ms. Apple has always been known for providing highly responsive multi-touch devices, but it will definitely come as a shock for some to learn that devices like eight-inch Galaxy Tab 3 were way behind the pack with a response time of 168ms. That’s more than double than that of the iPad mini under the same test conditions. 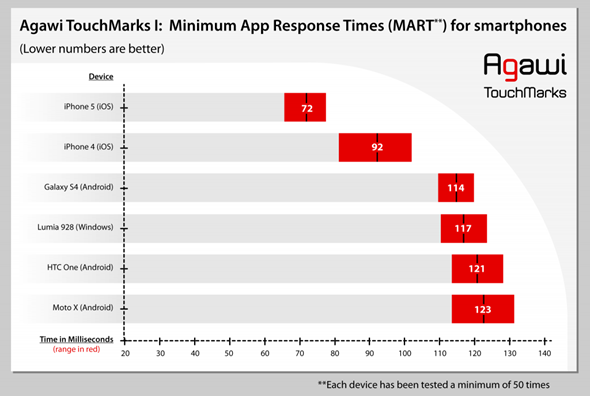 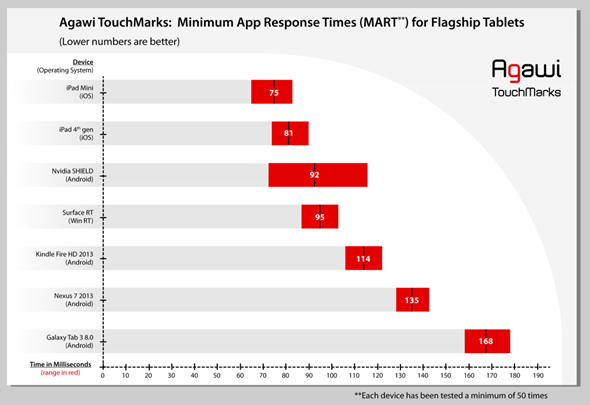 Agawi has noted through their studies that a number of the devices tested offered a wide range of response times. The iPhone 4 and Moto X handsets were shown to produce often unreliable results that varied dramatically throughout each test. The full report is an extremely interesting read, but the upshot is that cheaper devices will undoubtedly offer degraded performance and well-developed apps on iOS devices will feel sharper and a lot more responsive than on other devices.