Alleged iPhone 5 Logic Board Leaks, A5 Processor And 1,430mAh Battery Shown Off [PHOTO]

Apple’s philosophy of faster, thinner and lighter has worked wonders thus far in the annual upgrade of its popular iPhone device. The iPhone 5 will follow the same motif of its predecessors when it finally rears its head, and the images are now springing up demonstrating the device’s mainboard, complete with an A5 chip which already has analysts tipping it to out-perform the the powerful Galaxy S II from rival; Samsung. 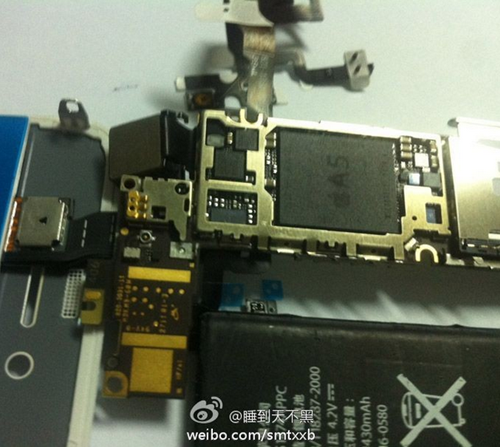 Battery life is also an issue which tends to plague powerful smartphones. Whilst having a million and one features is a productive plus, being let down by the battery down can be the difference between a good device and a great one. In order to cater for the slightly larger purported screen and more powerful innards, it looks as though Apple has slightly upgraded to a 1,430mAh lithium-ion battery from the 1,420mAh one found in the iPhone 4.

While it has long since been rumored that Apple’s next iPhone will pack the A5 chip, these leaks, which have stemmed from China’s incarnation of Twitter, give a little more substance to the claims.

Recent benchmarks have revealed that the iPad 2’s A5 chip is a fraction under twice as fast in the graphics-centric GLBenchmark 2.1 as the Galaxy S II’s 1.2GHz Exynos processor. While the Cupertino company has a reputation for somewhat detuning processors in order for them to run properly in the smaller smartphone housing, it is still thought that there will be a noticeably superior performance versus rivals on the market.

The battle for supremacy in the smartphone market this Fall will certainly be a fierce one with the fruit company’s new arrival joining the party sometime next month, and it will be interesting to see which device, OS and company emerges victorious. The Galaxy S II LTE will attempt to counter the iPhone 5 later on this year, although again, unless fundamental changes are made to the processor design or graphics core, it is likely to lag behind Apple’s offering – at least in terms of general performance.

The iPhone 4 is currently a relatively fast and smooth experience not just in general use, but when playing polished, console-esque games as well as watching HD video. With the fifth installment set to be even faster, rival manufacturers look set to have a mammoth task in attempting to knock the iPhone from its perch.