Here’s a full growing list of more than 100 hidden and secret features in iOS 10 for iPhone, iPad and iPod touch that you likely don’t know about as yet.

Did you know that the latest version of Apple’s mobile platform packs over 100 new hidden / secret features that Apple has made no fuss about? It’s always extremely exciting for iOS device owners to be able to watch the live stream of Apple’s keynotes in order to get a better understanding of what is coming in future version of the platform. With that said, it’s often the features that aren’t mentioned during the keynotes that have the most appeal, and iOS 10 has a ton of them it seems. 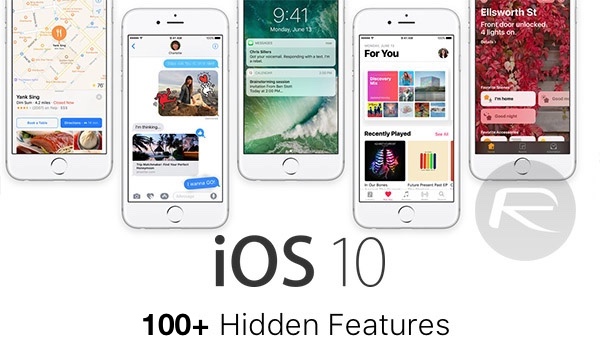 When Craig Federighi, Apple’s senior VP of Software Engineering, took to the stage back at WWDC in June, he almost instantly announced that he was going to use his stage time to talk about the ten most notable additions and improvements within the new iOS 10 release. What he didn’t mention was the seemingly never-ending list of additions that make iOS 10 such an impressive feat of engineering. After all, iOS 10 is, at least according to Apple, the “biggest iOS release ever”.

For one, he didn’t mention the ability to customize read receipts in iMessage on a per contact basis. He certainly didn’t touch on the high fact that stock apps can now be deleted and then re-installed from the App Store at will, or mention the fact that the Control Center can now make use of 3D Touch. Removal of Game Center is another one. On the lighter side of things, intensity adjustment for the flashlight/torch? You got it.

Here’s the list of iOS 10 features that you likely don’t know about as yet:

Update x1: We now have a video showing most of the above mentioned hidden features of iOS 10 in action: