Regardless of personal preference, it’s always fascinating and enlightening to research the history of a company to see what has put them into the position they are in today. It isn’t only company history that is intriguing, however. We should all know Apple’s back story by now, but it also seems that the iPhone’s default text messaging tone also has an interesting past.

It’s just a text tone, right? Well, yes it is, but it’s a tone that is synonymous with the iPhone and Apple. Hear it go off in someone’s pocket or while walking down the street and you immediately know the the type of phone that they have. The same sort of thing happened with Nokia. The “Nokia Tune” – also known as Grande Valse – is immediately recognizable and can trace its roots back to 1902 from a composition by Francisco Tarrega. The default iPhone text tone – labeled as the Tri-Tone by Apple on their devices –  isn’t as old as that, but it does go back as far as 1999 when Kelly Jacklin began composing a tune on behalf of a now obsolete company called SoundJam MP.

It’s easy to think that everything that shipped with the original iPhone was created specifically for the device, but it just isn’t the case. SoundJam MP was ultimately purchased by Apple and their software was revamped and turned into what we know as the original version of the iTunes offering, but before that acquisition, they needed a nifty little catchy tone to use as an alert for when CDs were finished burning. As an engineer and a hobbyist musician, Kelly Jacklin was drafted in to see what he could come up with. He recalls his inspiration and the sound he was aiming for:

I was really into the sound of marimbas and kalimbas at the time, so I thought I’d try both of those. I also went through bank (after bank) of sounds built into the SW1000XG, auditioning instrument sounds, and found three other instrument sounds that I liked: a harp, a koto (Japanese zither), and a pizzicato string sound (that’s the sound a violinist makes when plucking the string, rather than bowing it). 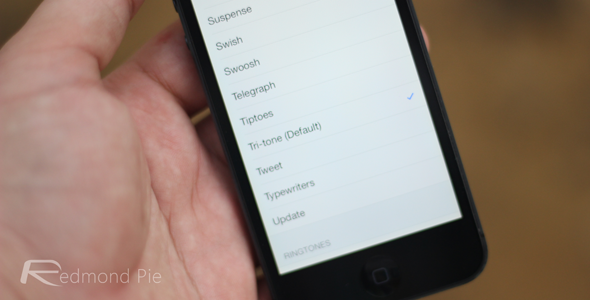 A simple sound, created with a simple idea in mind has resulted in one of the most immediately recognizable tones in the technology industry. Originally found in the SoundJam MP software as intended, it now ships with millions of mobile devices every year. It’s worth noting that Jacklin’s original composition was known as “158-Marimba”, which it seems Apple have changed and refer to as the “Tri-Tone” on their iOS devices. It’s also worth noting that this shouldn’t be confused with the default Marimba ringtone sound file that ships with the iPhone.

(Source: JacklinStudios) Thanks, Yoni for the hat tip!